To commemorate the 100th anniversary of the start of the First World War, I am working on a series of blog posts and radio shows that will remember some of the Manitobans who died in action. For more about this project and links to other posts follow this link.

Born and raised in Brandon, Harvey Harrison was one of at least seven children of Thelismar and Jennie (Cummings) Harrison. By 1915, two of the siblings had died at ages eighteen and nine, two daughters had married and moved away, and three, Harvey, Clifford and Jessie, still lived at the family home at 429 Third Street.

In February 1915, Thelismar, a retired farmer and businessman, died at the age of 76. 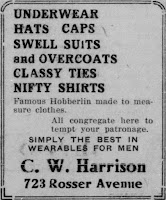 Harvey worked at the clothing store owned by his brother, Clifford who was eighteen years his senior. C. W. Harrison Clothiers was located at 723 Rosser Avenue.

Three months after his father's death, Harvey enlisted with the 78th Battalion -  Winnipeg Grenadiers. It was led by Lt. Col. James Kirkcaldy, a former Brandon police chief, but based out of Winnipeg.

Harrison, 20, went overseas in the spring of 1916 and by November was admitted to hospital with a series of issues, including a back injury, blistered feet and measles. He returned to the front in April 1917.

On September 2, 1918, the Grenadiers were fighting at Somme, France when they came under fierce attack. The record of his death, as noted in the Supplement to the London Gazette of December 2, 1918:

"The officer (Lieutenant H. E. Harrison) led his platoon with great skill, overcoming the resistance of a machine gun, killing one and wounding another of the crew himself. When all the officers of his company became casualties, he assumed command and met an enemy counter-attack with determination. When ordered to withdraw, he remained until the last section got away, his coolness and judgment having a splendid effect on all ranks.”

Harrison was also wounded with gunshot wounds to the abdomen and neck. His medical records note that he was considered "dangerously ill" before succumbing to his injuries on September 15, 1918 at the age of 23. He is buried at the Abbeville Communal Cemetery Extension, Somme, France

For his actions, Harrison was posthumously awarded the Military Cross with one bar, one of just 324 given during the war to commissioned officers “for distinguished and commendable services in battle”.

Around the time of his death, two members of the 78th Battalion were awarded Victoria Crosses: James Tait for actions on August 9, 1918 and Samuel L. Honey for actions on September 27, 1918.

Also around the same time, five men in Harrison's battalion were killed on or around August 11, 1918, but their bodies were not found until 2006. They were buried in 2015.