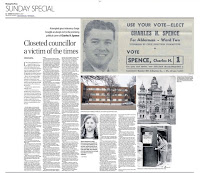 Watching coverage of the Pride weekend celebrations, I find myself thinking about a man I wrote about back in December for my Winnipeg Free Press column.

Charles Harold Spence was a rising public figure in Winnipeg in the 1950s and early 1960s with a high-profile job and a seat on city council. He also had a secret: he was gay.

A member of the city's police commission, Spence locked horns numerous times with chief Robert Taft. Their dislike for each other was referred to as a "running public feud" by one reporter.

Spence's public life came to an abrupt end when he was the subject of an all night police surveillance operation on July 1 - 2, 1961. It led to a charge of attempted gross indecency for propositioning a man inside Spence's Ellice Avenue apartment block.

Spence resigned his seat and eventually left town to find work. In 1980 or so he did return to Winnipeg but did not resume any public life and died in 1987 at the age of 62.

It is nice to see so many people, including elected officials, celebrating how far the community has come in the past 50 years. Thankfully, there will be no more Charles Spences.

As for the Spence column, I put many dozens of hours of research into that piece. It hung around in my hard drive for a couple of years while I hoped to find a person or a detailed document pertaining to him. I did not and I know that I only scratched the surface of what had really happened.