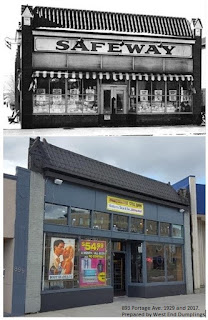 Last summer I posted about some renovations that had be done at what is now Bodyshades at 893 Portage Avenue at Arlington Street. The building was one of the city's first batch of Safeway stores which opened in November 1, 1929. (For more about the history of the building.)

In the summer of 2017, the owner renovated the exterior and the demolition revealed a remarkably intact original Safeway store facade. It was likely the best in the city, containing the horizontal row of windows below the sign and even had the holes from where the original awning and sign were. (For renovation photos.)

Earlier this week, someone drove through it.

Nobody was hurt and the building will survive. The business, however, will be closed for some time.