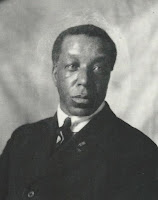 My column in today's Winnipeg Free Press celebrates the life of one of rural Manitoba's first black settlers, William "Billy" Beal, and the community that has worked hard to ensure that his memory is kept alive.

Beal, a steam engineer by trade, came from Minnesota and settled in the Big Woody district, near Swan River, in 1906. He spent his life helping to build his community by creating its first library, being a founding member of its school and literary society, and even providing assistance to local doctors in times of epidemic.

His most lasting legacy, though, are his photographs.

Through the 19-teens and 1920s, Beal photographed the people of the region and dozens of these images survive to this day.