To commemorate the 100th anniversary of the start of the First World War, I am working on a series of blog posts commemorating 100 Manitobans who were killed in action. For more about this project and links to other soldiers follow this link.

This post also coincides with the 100th anniversary of the Halifax Explosion and looks at the life and death of seventeen-year-old Able Seaman Bert Saunders of Winnipeg who found himself at the epicentre of the explosion on a rescue mission. He is likely the only Winnipeg victim.

Albert "Bert" Saunders was born near Holland, Manitoba on January 2, 1900 to Annie Saunders (nee Rutherford) and husband. When still a young child, his father died and Annie remarried Malcolm L. McPhail of Winnipeg, a federal government bridge inspector, in February 1911.

The family initially settled at 162 Polson Street but moved frequently to addresses around the North End. 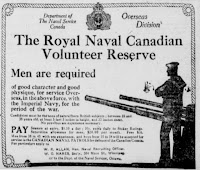 Bert enlisted to serve with the Royal Naval Canadian Volunteer Reserve (RNCVR). Because service files for naval personnel are not part of Library and Archives Canada's Personnel Records of the First World War database his exact date of enlistment is unknown.

Saunders could have signed up as young as age fourteen as the Navy had a category of sailor known as "Boy". The fact that Saunders' date of birth in military records and date of birth in the Manitoba Vital Statistics database differ by three years, (1897 instead of the actual 1900), it is likely that he simply lied about his age when he signed up.

When his mother was interviewed for a newspaper story on December 14, 1917, she noted that he had left Winnipeg with the navy "about a year" earlier, so he was likely sixteen years of age at the time of enlistment. 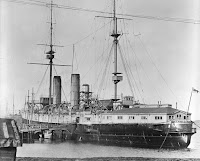 Saunders was assigned to the HMCS Niobe which holds a special place in Canadian naval history as the country's first warship.

Built in 1897, she was purchased by Canada from the Royal Navy in September 1910 and brought across to Halifax. (Niobe Day is celebrated by the Royal Canadian Navy on October 21st of each year.)

By the time the First World War began the Niobe was a relic. New ships that were better suited for the rigours of wartime patrol had been ordered and the Niobe was converted to a depot ship that stayed moored in Halifax Harbour. 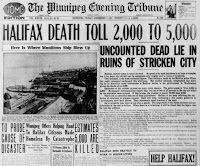 On the morning of December 6, 1917, the Niobe was only about 700 metres away from where the French cargo ship SS Mont-Blanc, laden with explosives, collided with the Norwegian SS Imo in Halifax Harbour. The initial result was a fire aboard the Mont-Blanc.

Realizing that a disaster was about to occur, the Commanding Officer of the Niobe called for volunteers to go out on one of its pinnacles, (a small, steam powered boat), to assist in rescuing the Mont-Blanc's crew and perhaps help guide the burning ship out of the harbour. It was said that Able Seaman Saunders was the first of six to step forward.

W. G. McLaughlin photo soon after the explosion. The Niobe is ship producing steam
on right side of image (Library and Archives Canada)

As the pinnacle came along side the Mont-Blanc the munitions inside exploded.

Not only was the small boat and its men obliterated, the Halifax Explosion and resulting tsunami wiped out a large portion of the city and killed nearly 2,000 people. It was the deadliest man-made disaster until the Second World War bombing of Hiroshima and Nagasaki. 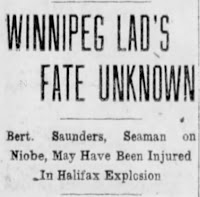 The aftermath of the explosion was chaotic. The task of rescuing survivors and recovering the dead was hampered by a lack of people and infrastructure. A heavy rainstorm that soon turned into a snow storm added to the difficulty and misery.

For those with loved ones living in Halifax, or thought to be in the region due to military service, the wait for news was agonizing. Communications lines were cut and it took days for telegrams to reach recipients.

In the last letter Annie McPhail received from her son, he wrote that he had recently received a pass to sleep away from the ship. (He also mentioned that he got permission to come home to Winnipeg for Christmas.) She desperately hoped that December 5 - 6 was the day he used his pass and was away from the harbour or the city when the explosion took place. 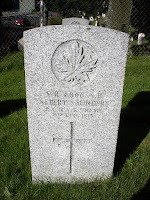 On December 14, 1917, McPhail was informed by telegram of the death of her son who was just weeks away from his eighteenth birthday.

Though his body was never recovered, Saunders has a burial site in the Fort Massey cemetery in Halifax. He is also commemorated on the Holland, Manitoba war memorial and by the informally named Saunders Creek near Holland, Manitoba, on land once owned by the Rutherford family.

After reading dozens of stories about Winnipeggers waiting to hear about the fate of loved ones in the aftermath of the explosion, I believe that Saunders is the only true Winnipeg victim. (This is after reading dozens of period newspaper articles and a search of the Halifax Explosion Memorial Book.)

Some Winnipeggers did lose family or friends but it appears that they all lived in Halifax or other places in Canada.

Annie McPhail contacted the Tribune after she received the telegram and shared Bert's story with the paper.

Soon after, she and the families of the other men in the pinnacle, (they were Carl C. Wilson, George Yates, Charles McMillan, Freeman Nickerson and Walter O'Reilly), received a "Letter of Appreciation" from the Canadian Navy that concluded: The boat's crew were fully aware of the desperate nature of the work they were engaged on, and by their gallantry and devotion to duty they sacrificed their lives in the endeavour to safe the lives of others.

In March 1919, McPhail shared with the Tribune another Letter of Appreciation, this one from the British Lords Commissioners of the Admiralty, (the date of the letter was not mentioned.) It read:


I am commanded by my Lords Commissioners of the Admiralty to inform you that they have received from the director of Naval Services, Ottawa, a report on the gallant conduct of your son, the late A. B. Albert Saunders, on the occasion of the explosion at Halifax, N.S., on December 6, 1917.

Your son was one of the crew of the Niobe steamboat and volunteered to go away to the SS Mont-Blanc when she was on fire after being in collision with the SS Imo.

The Mont-Blanc was known to have a cargo of explosives on board and My Lords desire me to convey to you an expression of their high appreciation of the great gallantry displayed by your son in volunteering to save life on this occasion and of their regret that he himself lost his own life owing to the Mont-Blanc blowing up just as the steamboat got alongside.

My Lords further desire me to convey to you an expression of their sympathy with you in your bereavement.

Aside from the Letters of Appreciation, it appears that Saunders was awarded no medals or other honours for his service.