Manitoba's reaction to the 1917 Halifax Explosion 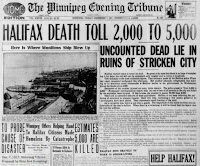 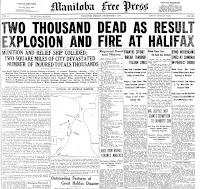 Like most of the world, Manitobans were shocked by the news that on December 6, 1917, the explosives-laden French cargo ship SS Mont-Blanc collided with the Norwegian SS Imo, acting as a Belgian relief ship, in Halifax Harbour.

Though it would take days to get a handle on the death toll, it was clear that this was one of the world's deadliest man-made disasters. The most recent official estimate of the number of people killed is 1,835 (source) with thousands others injured.

The stories of death and destruction even manged to push World War I off of the front pages for a couple of days. 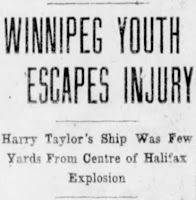 Initially, people's thoughts turned to loved ones in the area. Normally, this would have been a small number but, thanks to World War I, there were thousands of additional people in the region either stationed there or travelling through it to and from the front.

One such man was Harry Taylor who worked at Winnipeg's CPR freight yards before enlisting. He served aboard the HMS St. Eloi, a newly launched trawler built for patrol and escort duties, based at Halifax Harbour.

His family were put out of their misery when, four days after the explosion they received a telegram from Harry to say that he was safe. He credited the fact that he was below deck in the heavily fortified engine room at the time of the explosion for saving his life.

The commanding officer of the ship was not so lucky. He was on deck and killed by flying debris.

Harry's story was pretty typical for those awaiting word personnel stationed in Halifax. Once telegraph lines were repaired, which took about three days, messages began arriving in the city and almost all brought good news.

The one exception was Able Seaman Bert Saunders.

The 17-year-old was stationed aboard the depot ship HMCS Niobe just a few hundred meters away from where the two ships collided. He was one of six men who volunteered to take a small boat over to the burning Mont Blanc in the hopes of saving crew members and perhaps guiding it out of the harbour.

The boat and its men were obliterated as they pulled up along side the Mont Blanc and it exploded. (You can read more about Saunders' life and death here.)

Saunders, I believe, is the only "Winnipegger" killed in the blast. Though there were numerous stories of local people losing family members or friends, it appears that none of them were from Winnipeg, or at least had not lived here in a very long time.

The needs of the people of Halifax were many. The call went out across North America for money to supply food, shelter and medical care.

The governments of the day did donate to the Halifax Relief Fund. Final figures are hard to determine, but in the immediate aftermath Manitoba donated $25,000, Winnipeg gave another $25,000 and Brandon $3,000.

Both the Tribune and Free Press had their own relief funds that people could donate to and it seems clear that most of the money collected from Manitoba came from individuals and community organizations, not from governments. 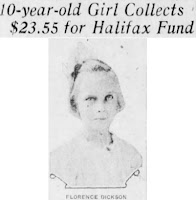 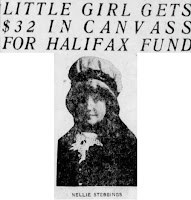 Almost immediately, donations big and small poured into the newspapers.

Some were from children who were touched by the stories of the large number of schools destroyed and of the kids left orphaned by the blast. Nellie Stebbings, a 12-year-old from Alexander School, and Florence Dickson, a 10-year-old from Melrose Avenue, were two who took it upon themselves to canvas their neighbourhoods to raise money.

The time of year was both a blessing and a curse for fundraising.

In the run-up to Christmas there were already countless concerts, recitals, school plays, dinners and other special events planned. Many gave all or part of their proceeds to the relief fund, such as the one above play at Laura Secord School.

The downside was that this was an important time of year for many charities and some were afraid that there would not be enough money to go around. People were encouraged to dig deeper because of Halifax rather than just shift around the usual amount of their seasonal doantions.

Aside from long-standing charities such as the Community Chest and Salvation Army there were some Christmas-specific campaigns like the Empty Stocking Fund that bought gifts for orphans and poor children.

This, of course, was on top of the needs of wartime charities. The Red Cross were sending care packages to troops and POWs overseas while numerous local agencies raised funds to provide assistance to local families struggling to make ends meet while the head of the household was away fighting in a prolonged war. 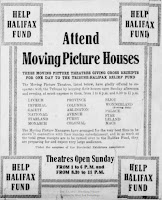 No final figures for the amount raised in Manitoba can be found. In mid-December, though, the Free Press reported that when the public campaigns of both newspapers and government funds were added together the total was just over $100,000 and this was before what was expected to be one of the largest fundraising days of all.

Sunday, December 15, was Halifax Relief Day in Winnipeg. The city lifted its bylaw restricting Sunday entertainment so that cinemas and theatres could put on performances. In return, they were expected to donate their entire gross receipts to the Halifax Relief Fund.

Another date was an already planned speaking engagement by Nellie McClung on December 20th, 1917. It was decided that it should be scaled up and made into a relief event.

The Walkers donated the use of their theatre and Maude Cowie a local opera veteran who had recently moved back to Winnipeg from Montreal, offered to sing. The mayor agreed to be the emcee for the night.

Fundraising efforts continued long after the Halifax Explosion disappeared from the headlines.

Mrs. R. G. Rogers and Mrs. A. J. Andrews helped put on "A Little Casino" at the Royal Alexandra Hotel on January 11, 1918. It was a mix of dances, skits, games of chance for a nickel and silent auction.  The goal was to raise $5,000 towards the long-term care of those left blinded by the explosion. (The Halifax Explosion was the largest mass blinding in Canadian history with over 1,000 people effected.) 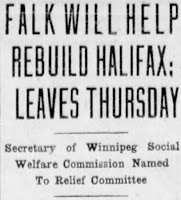 A man who had a long-lasting effect on the rebuilding of Halifax was J. Howard T. Falk, secretary Winnipeg's Social Welfare Commission, a city employee. Respected for his work on provincial and civic relief bodies, the Halifax Relief Committee requested his services to help oversee the rebuilding process.

City council agreed to give him a two month leave of absence, from early January to early March 1918, with the feds and city each picking up half of his salary.

Soon after he returned, he was hired away by McGill University to be their first Director of the School of Social Work.

To read such a good article is can learn many things, thank you very much for writing so hard, by the way have a look at our goods. Marijuana vape pens