My most-read blog posts and Free Press columns of 2017

Thanks to everyone who visited my blogs in 2017. With 79,000 page views for my "big three" it was a busy year. A special thanks to those who donated towards my new computer, a lovely new ThinkPad, which has made my work even easier.

At this time of year I like to look back and see what got the most attention over the past twelve months and share the list ....

I should really leave town. The majority of my top ten were about places outside of Winnipeg. That's fine by me as I enjoy exploring the history of other communities.

1. Brandon's Inter-city Bus Terminal History In May, Brandon's bus terminal went up for sale. As with Winnipeg, Greyhound was looking for a much smaller space as the province's inter-city bus service dwindles away.

2. Happy 135th birthday, Brandon, Manitoba: 1934 film footage! This year was Brandon's 135th birthday. I posted some film footage I found at the Manitoba Archives and made an index of Brandon-related posts from past years. I still have about a half dozen Brandon posts in my drafts folder that I should really finish up.

3. Brandon's Strand Theatre's 100th Birthday Gift  In January, Brandon's long-vacant Strand Theatre got a lifeline when Brandon University announced that it was purchasing the building. This post was a teaser for a Free Press column I wrote about the history of the place.

4. Injecting a bit of history into a community pollution debate Over the summer a pollution debate came to a head in St. Boniface. The alleged culprit was a modern day car shredder but I found that over the century some of the worst polluting industries once called the neighbourhood home.

6. Brandon's 8th Street Bridge to be Demolished In March, the City of Brandon announced that the ca. 1968 8th Street bridge would finally be replaced. I looked back at the history of crossings teh tracks in the Wheat City.

7. B.C. Mills' kit Bank of Commerce in Elkhorn is closing When CIBC announced that it was vacating its branch in Elkhorn, MB, not only did it leave the community without a financial institution, it also meant that one of the last "Prairie Style" Bank of Commerce kit buildings still used as a bank would close.

I've been blogging for a decade so it is no surprise that a majority of the year's most-read posts were actually written in previous years. This year, just one post from 2017 made the top ten.

Some of the posts are a little embarrassing to look back on as a number of the research tools available to me now were not back then, so some posts are quite thin on detail. From time to time I do try to reach back and clean up past posts, especially broken hyperlinks.

1. Brandon's Inter-city Bus Terminal History In May, Brandon's bus terminal went up for sale. As with Winnipeg, Greyhound was looking for a much smaller space as the province's inter-city bus service dwindles away.

2. Lives lived at 1021 Wellington Crescent In 2014, this house was destroyed by fire. I took a look back at those who called it home.

4. Safeway in Winnipeg Part 2 - The Boom Years A series written in 2010, which needs some serious updating, has always been a popular read.


5. Manitoba's Worst Train Disasters: Brandon (1916) Part of series, this crash in the heart of Brandon was likely Manitoba's, deadliest train crash until the Dugald Train Disaster of the 1940s.

7. Budweiser's Clydesdales and their Winnipeg origins One of my favourites. How Pat Shea's prize winning horses ended up across the border to become advertising icons.

8. A history of the Arlington Street Bridge - Part 1 Destined for replacement by 2020, here's a look back at the history of Winnipeg's Arlington Bridge.

9. "Put Your Trash Into Orbit" Seems people were looking back

10. Winnipeg's 5 Deadliest Fires This was the cover post for a series of Winnipeg's deadliest fires. 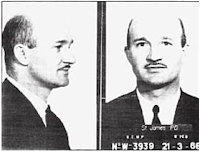 This Was Manitoba: Most-Read Posts of 2017

In the beginning, there was This Was Winnipeg. Meant to be a day-by-day look at historic events, every once in a while I branched out and wrote a more detailed blog post. Eventually, I started a new blog called West End Dumplings to host my long-form posts.

These are all from 2008 (!) but remain popular, especially the Flying Bandit which is my most-read blog post of all time. I also receive the most comments about it. As I say every year: why someone hasn't made a feature movie about him, I don't know.

1. Kenneth Leishman - The Flying Bandit
2. Eaton's Catalogue Houses
3. Len Fairchuk, The Western Hour and the Rex Theatre
4. The Rex and Starland Theatres and the rest of the 600 block of Main Street
5. Genser's Furniture of Winnipeg 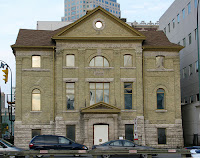 1. Sears' lasting Impact A look back at the retailer's 69-year history in Winnipeg.

2. When war came to Winnipeg The Nazi invasion of Winnipeg, also known as "If Day", made international headlines.

3. Closeted councillor a victim of the times The rise and fall of Charles Spence, a gay city councillor outed after police surveillance in 1962.

4. Driven to great heights  The story behind Winnipeg's very first multi-storey parkades, most of which are still in use today.

5. Taking a Strand Brandon's Strand Theatre gets a lifeline for its 100th birthday.

6. Double disaster in Carman In 1952, six people were killed in a combination air accident and radio tower collapse near Carman, Manitoba.

7. The woman behind the wheel Mary Staub became the city's first female transit driver in 1975.

8. Going off the rails The story of Brandon's streetcar system which lasted less than 20 years.

9. Work of Art Thirty years ago, ARTSPACE opened in an historic building in the Exchange District and is still going strong.

10. Etched in stone The story behind Manitoba's own Tyndall stone, which graces buildings across the country and around the world.

Thanks you so much for sharing us about I page Review are very new things we're recommending to visit your weblog once more and again. cannabis business Canada

The post is written in very a good manner and it entails many useful information for me. I am happy to find your distinguished way of writing the post. Now you make it easy for me to understand and implement the concept. cannabis dispensary business

There are many sensors that have been made ​​by the businessmen in the market from the beginning to the present. They have started to set one up. pompano beach apartments for rent by owner

This is a fantastic blog!I have certainly attained quite a lot of useful information today through this blog. cannabis business plan Europe

This is an excellent post I seen thanks to share it. It is really what I wanted to see hope in future you will continue for sharing such a excellent post. hemp cbd business plans

This is the knowledge I am finding all over the place. Thanks for your weblog, I subscribe your weblog. This is a pleasant weblog. Fish Mounts