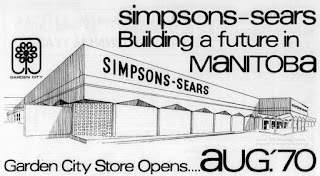 When Sears Canada announced earlier this summer that it would close 59 of its 129 stores across the country it meant bad news for the Garden City Shopping Centre. That location is now being liquidated and Sears has sold the building to new owners.

The disappearance of Sears from Garden City's retail lineup means more than just the lost of an original tenant. In fact, it was Simpsons-Sears, as it was known at the time, that made the ambitious mall plan a reality.

Check out my history of the Simpsons-Sears store jut posted at my Winnipeg Places blog for more!

P.S. Fun fact: the last original tenant appears to be Shoppers Drug Mart. When it opened in 1970 with the mall, it was the first Shoppers in Western Canada !