UPDATE: More information on the burial of Reginald Johnston.

Reginald Joseph Winfield Johnston was the second-youngest of seven children of a pioneering family in the of Fairford, Manitoba area. When he enlisted with the 107th Battalion at Winnipeg on January 19, 1916.

The 20-year-old, unmarried Johnston listed his occupation as "homesteader". 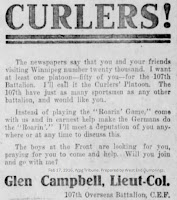 The 107th Battalion was recruited by a popular local war veteran and Lt. Col. named Glenyon Campbell. He was a draw at public recruitment events and even took out personal ads asking people to join him.

In fact, when was it was announced that the 79th Brandon Battalion, which Campbell recruited for, would be going overseas without him so that he could raise another local battalion, the 107th, it was reported in the Winnipeg Tribune in December 1915 that at least 200 men from the 79th applied for transfers.

Campbell made use of the network of Indian Agents to also spread the word and, as a result, the 107th was notable for its large number of Aboriginal and Metis recruits. (Johnston was, seemingly, Metis.) Recruits came from places like Roblin, Kelwood, Brandon, Gilbert Plains and Winnipeg.

After arriving in England, Johnston was transferred to the 16th Canadian Infantry Battalion (Canadian Scottish). He was killed in action during the Battle of Hill 70 on August 15, 1917.

Johnston's body was not found until a munitions clearing exercise in the small town of
of Vendin-le-Vieil, France in 2011 discovered skeletal remains. The Department of National Defence's Casualty Identification Review Board determined that they were Johnston's.

Johnston will be buried August 24, 2017, in the Loos British Cemetery in Loos-en-Gohelle, France. Five members of his family will be in attendance for the ceremony.

Remains of WW I soldier from Manitoba found
CBC News

USA, Canada support of QuickBooks will resolve all your issues as fast as possible whenever you need. Just stay with the QuickBooks USA, Canada Support Phone Number 1-888- 867-9209 and get the technical help through technician Intuit QuickBooks Technical Support Number USA, CANADA

HOW I BECAME A VICTOR AFTER SO MANY FAILED ATTEMPT OF GETTING A LOAN.

I feel so blessed and fulfilled. I've been reluctant in applying for a loan i heard about online because everything seems too good to be true, but i was convinced & shocked when my friend at my place of work got a loan from COLLINS GUZMAN FUNDING'S & we both confirmed it and i also went ahead to apply, today am a proud owner of my company and making money for my family and a happy mom. As a single mom with three kids it was hard to get a job that could take care of me and my kids and I had so much bills to pay and to make it worst I had bad credit so i couldn't obtain a loan from any bank. I had an ideal to start a business as an hair stylist but had no capital to start, tried all type of banks but didn't work out until I was referred by my co-worker to a godsent lender advertising to give a loan at 2% interest rate. I sent them a mail using their official email address (collinsguzmanfundings@gmail.com) and I got a reply immediately and my loan was approved, and I was directed to the Bank site where I withdrawed my loan directly to my account. To cut the story short am proud of my hair stylist company and promise to testify to the world how my life was transformed.. If you are in need of any kind of loan, i advise you contact Collins Guzman Funding's and be financially lifted Email: collinsguzmanfundings@gmail.com OR Call/Text +1 (786) 598-8751