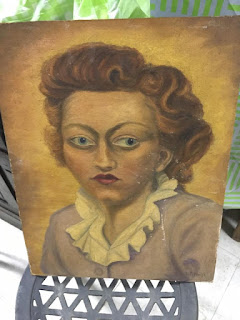 CKUW radio host and man-about-town Kelly Hughes posted a photo of this painting last week. It was part of an eclectic mix of items he was trying to get rid of from his basement, likely stolen from other people's homes, (kidding!)

The unframed oil-on-wood bears the signature "R. J. Wolfe" and no other identifying information.

Always up to challenge myself, I thought I would try my best to find out more about the artist. 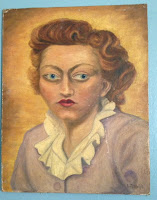 After some research, I am quite sure that the R. J. Wolfe who painted this portrait is Richard Jeffreys "Jeff" Wolfe (1905-1974). I say "quite" because I could not find a reference to this exact work.

There was, however, an active local artist and art teacher named R. J. Wolfe who was involved in the Winnipeg Sketch Club from the 40's to the 60s. For much of this time, he was one of only two people to go by the name "R J Wolfe" listed in the Henderson Directory, the other one was a trucker.

There is no detailed biography written about R. J. Wolfe anywhere. The information below is pieced together from a couple of dozen newspaper mentions and a few online references. If you have more information about the man or your own theories about who "R. J. Wolfe" was, I'd love to hear from you. Please include it below in the comments section or email me!


Born in England, Richard Jeffreys Wolfe likely came to Winnipeg as a child and his family settled in the West End. Someone with that same full name attended Greenway School and graduated from Daniel McIntyre Collegiate in 1924.

A 1950s Free Press article states: "… he studied art under A. Musgrove and at the Winnipeg School of Art, studied at the St. Ives School of Painting in Cornwall (England), the Slade School of Fine Art at University College, London and the Academie Julian in Paris."

I could not find out his exact local post-secondary education and the studying he did internationally was likely by visiting these places as part of a sabbatical he took with is family in 1951, which is mentioned below. 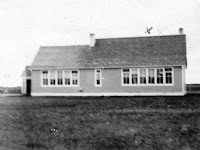 Blanche had been a teacher at the two-room Highland School in St. Clements since 1928. For the 1930- 31 school year the couple taught there together, the only two teachers on staff.

Wolfe then taught at Kemnay, Manitoba before becoming principal of Deloraine School for the 1934 - 35 school year. Later that decade he taught in Carman, Manitoba, the Wolfes being added to the town's election rolls in 1937.

By the 1940s, they were living in Winnipeg. Initially they rented homes and eventually settled at 539 Borebank street in the 1950s.

As for Blanche, she left teaching soon after marriage to concentrate on their family. The couple had two girls: Kathaleen Nancy, who died in December 1937 at Carman, when just a couple of weeks old. Another daughter, Eileen Patricia, followed.

When their daughter was older, Blanche became a substitute teacher at Winnipeg School Division No. 1.

The first mention of Wolfe as artist was at a non-juried art show in September 1946. It was hosted by the Canadian Federation of Artists (CFA) and showed 99 submitted pieces from Manitoba and Saskatchewan that hung at the Winnipeg Art Gallery for two weeks.

In a Winnipeg Tribune review of the exhibit his painting earned a mention: “R. J. Wolfe’s' Peeping Tom' is memorable; a brown staring face set between the oaks slabs of a half open door, also brown.” The reviewer refers to him as “a new artist”.

He showed at another non-juried show of the Manitoba Chapter of the CFA in December 1948. A Tribune reviewer wrote: “In deference to Christmas season, it may not be appropriate to close with mention of R. J. Wolfe’s ‘Magic Land’, an oil which depicts children peering into a delightfully fantastic display of snow, Hansel and Gretel houses, gigantic candy cane, and Santa Claus in his sleigh. 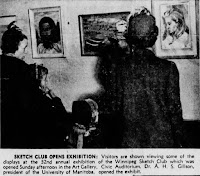 In 1948, Wolfe became a member of the Winnipeg Sketch Club and showed his piece 'Pavillion at Assiniboine Park' at their November show at the Winnipeg art Gallery. His name pops up from time to time in articles about Sketch Club happenings over the next decade.

Wolfe took a year-long sabbatical from the school division to study art in 1951. His wife and daughter Patricia, then 14, accompanied him. It was during this trip that he visited schools and galleries in London, Cornwall and Paris.

Upon Wolfe's return, he gained a reputation as a vocal critic of modernist art. His feeling was that it was little more than a passing fad.

At a February 1952 meeting of the Sketch Club he made a presentation about his trip and proclaimed that: "Modern art has had its day", noting a number of shows that had not done well in Europe and citing some people in the art world that he had spoken to on his journey.

This led to a  Free Press article in September 1952 about his trip. He told the paper: "There is a definite trend towards the more normal. And in about another five years I think the accent will again be on realistic painting to a much more marked degree than it is today."


In a scathing letter to the Winnipeg Free Press, which appeared November 11, 1955, he congratulated reviewers for panning recent modernist shows at the Art Gallery. He wrote: “So-called ‘modern art’ was well on its way to burial in Europe as long ago as 1951” and referenced some shows there that failed. He concluded “If an artist wants to go up into an 'ivory tower' and paint tripe for his own amusement, that’s his business, but let’s not have it in our Art Gallery.”

In February 1959, CBC Winnipeg's television program Roundtable took on the topic "Is this Art?" It was in relation to the Jacques Lipchitz collection of sculptures and sketches that was showing at  the Winnipeg Art Gallery from February 8, 1959 - March 8, 1959. The panellists were: Jan Kamienski, Winnipeg artist; R.J. Wolfe, city schools art teacher; and sculptor Leo Mol, sculptor.

The only photo I could find of Wolfe was in a 1955 story in the Winnipeg Tribune about Winnipeg School Division's adult night school program at Kelvin High School. He is shown teaching art.

Wolfe was also a member of the Southwood Golf Club and a pretty good golfer. His name appears in the late 60s and early 70s as part of the senior golf circuit in the city.

Wolfe retired in June 1968, but before he left he made a little splash in the media after appearing at a public hearing about the "joint school board - teachers association youth study".

He told the panel that he had grown fed up with the insolence found in schools. He wanted to see a strict enforcement of the corporal punishment rules and even suggested that for the worst students the division set up one school as a detention centre with classrooms on the main floors and dormitories above. “It’s one thing or the other, or else are schools are going to go to pot.”

It became a CP wire story and in Manitoba was picked up by the Brandon Sun.

On May 14, 1968, the article was referred to on the floor of the Legislature by John Tanchak, MLA
He asked the minister that in view of Wolfe's comments were schools getting the supports they needed to handle delinquent students. It was part of a series of questions asked by opposition members on the topic of educational and time ran out before the minister's designate got to the answer.

If someone really wanted to take this search to the next level, the Winnipeg's Sketch Club's fonds are at the Winnipeg Art Gallery Archives. It includes select catalogues from their shows over the years. A search MAY turn up more information about his painted lady, assuming that it was done for a showing.

If you want your ex-girlfriend or ex-boyfriend to come crawling back to you on their knees (even if they're dating somebody else now) you must watch this video
right away...

(VIDEO) Text Your Ex Back?

Thanks for the excellent research .. she is on my wall . Its an odd peice but i love it ! Thanks to kelly hughes who brought me many a unique peice ..