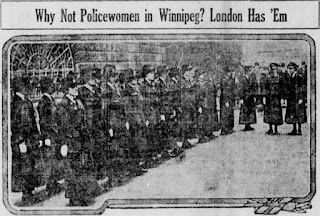 
The first two women hired by the Winnipeg Police Service were sworn in as officers on January 4, 1917.

Though some European cities had policewomen since at least the turn of the last century, the issue wasn't covered much in local newspapers until they were brought into the New York City force in 1913. The following year, large numbers of women entered the ranks of police forces in England to free up men to fight in in World War I.

Calls to have women on the Winnipeg force began around 1915, led by organizations such as the Council of Women and social agencies like the Salvation Army, which had long worked with women and girls who got in trouble with the law.

The Free Press' Women's Editor, Lillian Laurie, reported about the growing number of women in police forces from around the world in her section of the paper and wrote editorials calling for them to be hired here. One example, on February 19, 1916: 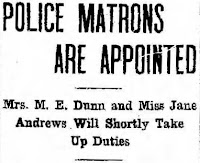 At the Winnipeg police commission meeting of November 30, 1915, chair Alderman F. H. Davidson expressed his approval, with a proviso: “Though I am open to conviction in this matter, it seems to me that the place for women in connection with police work the social uplift sphere.”

The following month, at their December 29, 1916 meeting, Davidson announced that two candidates had been chosen for the force: Jane Andrews and Mary Dunn. They were sworn in for duty together by magistrate Hugh John Macdonald on January 4, 1917.

For whatever reason, Andrews was referred to as the “city’s first policewoman” right through to her death in the 1950s but in more recent years that credit has been given solely to Dunn. Newspapers of the day clearly indicate that both women were appointed and sworn in together.

Interviewed the day before the job officially started, Dunn admitted that their role would be as much about social workers as policing: "While we will have the powers of arrests, it does not necessarily mean we will go out on patrol looking for delinquent women and girls whom we will take the police station.”

They appeared infrequently in the newspapers for their work. The odd big time arrest of a female their or seeking / rescuing a runaway. A September 1917 Tribune article noted that the two women were busy, but: "devote their time to morals cases which are generally settled out of court and are therefore never given the publicity which other police workers get." 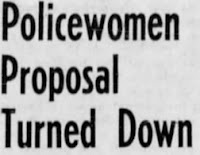 Interestingly, by World War II things had gone backwards for women in policing. By 1941 both Dunn and Andrews were retired and there was only one policewoman, Helen Hansford, on the force. Stella Pelloxfen of the General Hospital's social work department called it a "disgrace" at a public meeting that year.

Even in 1943, with the police force down by 25 men due to the war and having difficulty finding fit replacements, Police Chief Gordon Smith flatly refused to even consider hiring women. "They have no place on the beat" he told a reporter.

Various social agencies rallied and convinced city council to pass a motion in 1946 that three policewomen be hired for the force but the police commission refused to enact it.

Here is a look back at those first two policewomen:

Born in Hants County, Nova Scotia on November 8, 1872, Andrews trained with the Salvation Army in social work and worked for the organization for 20 years in England and Canada.

In 1913, she was appointed superintendent of the Salvation Army’s Kildonan Industrial Home. It was basically a detention centre in West Kildonan that took in women and girls caught up in the legal system, usually first-time offenders, and taught them life skills in the hopes that they would not re-offend.

Andrews was on holidays in nova Scotia to visit family when she fond out she got the job. One year later she lost six cousins in the Halifax Explosion.

A Free Press reporter caught up with her in the police station on her first day of work but she told him that she was too busy "getting settled" to grant even a brief interview.

Andrews retired on April 30, 1938, after 21 years on the force. At the time, she said that she intended to return to Nova Scotia, but ended up staying in Winnipeg.

In 1941, she created the Winnipeg Chapter of the “Plane Jane” fund, a fundraising effort aimed at women to help raise funds for a fighter jet for the RCAF. She also worked with the Children’s Home.

She died at Princess Elizabeth Hospital on October 21, 1953 at the age of 80 and is buried in Elmwood Cemetery.

Born Mary Halpin in Ottawa in 1872, she married William Dunn and they relocated to Winnipeg in 1905, eventually settling at 759 Broadway, (now demolished.)

William died in 1913 leaving Mary to raise the couple's eleven children, six daughters and five sons. As the children got older she found time to be active in social work with the Red Cross and Catholic church organizations such as the Providence Shelter for Children's Aid before joining the police department.

In April 1920, she resigned to marry Joseph Guertin, a former Canadian Pacific Railway police offer who by that time was working for the railway proper. He died in a rail accident in November 1921 at the age of 56.


Mary continued to live at the Broadway address as Mary Guertin, focusing on her charitable work with the Catholic Women's League and St. Mary's Cathedral.

Dunn died at Misericordia Hospital on January 30, 1928 at the age of 54. She is buried in St. Mary's cemetery.