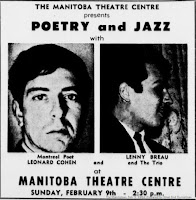 In February 1964, 29-year- old Leonard Cohen made his first visit to Winnipeg.

At this point in his career, Cohen was best known for his second collection of poems, The Spice-Box of Life (1961) for which he won a CBC award for new literature and two Canada Council awards. He also had just published his first novel The Favourite Game three months earlier.

Thanks to these accolades and and appearances on CBC radio, Cohen was making a name for himself across the country. 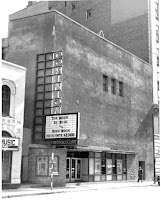 Cohen was visiting Winnipeg to participate in a 1964 Manitoba Theatre Centre special production called "Poetry and Jazz" where he and master guitarist Lenny Breau shared the stage. It took place on the afternoon of February 9, 1964 and admission was $1.00.

At the time, MTC was located at the time in the old Dominion Theatre on Portage Avenue East.

Neither of the daily papers reviewed the show.

Free Press entertainment reporter Phyllis Laking caught up with Cohen while he was in town. She noted that he certainly looked like a poet: “He was wearing a dark blue suit, brown suede shoes and a Beatles haircut.”

As for is impressions of the city, Cohen complimented the new airport as "lovely" and added: “I would say the same thing about Manitoba that Lawrence of Arabia said about the desert: I like it because it's clean."

Cohen did other readings while here, including one at the University of Manitoba the following week. The original lecture room had to be switched to a theatre due to a larger than expected crowd.

That event appears not to have been reviewed either, but in a Letter to the Editor to the Free Press following the event “D.U.S.” gave their take on it: "The large theatre used was overcrowded with stupid, smiling, noisy young girls who seemed eager only to gaze at the ‘poet’ and to laugh too loudly and nervously at sexual references in his work.”