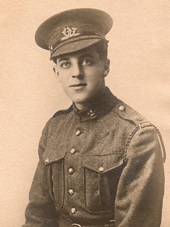 In 1910, at the age of 16, Black emigrated to Canada to join his five brothers who already lived here.

Black held a variety of jobs in his short time in Winnipeg. In the 1911 Henderson Directory he was listed as a messenger for the audit department of CN Express, the train company's courier division. In 1912, he was a clerk with the CNR's general passenger department.

Harold then became a Customs Officer. Documents to not say where he was posted, though the two largest customs centres in the city at the time were offices in the CP Rail Station (now the Aboriginal Centre) on Higgins Avenue, and the Customs Examining Warehouse on McDermot Avenue.

Black lived at a number of Winnipeg addresses.

The following year, he moved in with brother, Robert, at suite 11 of Bartella Court at 377 Home Street. It was around the same time he joined up with the 90th Battalion Rifles militia, now the Royal Winnipeg Rifles.

In September 1915, Black enlisted with the 90th Battalion. He noted on his attestation papers he was single and listed Robert as his next of kin.

Black arrived in England on June 8, 1916. Soon after, he was transferred to the newly formed 78th Battalion (Winnipeg Grenadiers), and on September 30, 1916 he joined his new unit in the field.

On October 31, 1917 he was hit by enemy fire. His military file notes that he had shrapnel wounds to one lung and arm as well as gun shot wounds in the throat, back and chest.

Black was taken to No. 24 General Hospital at Étaples, France where he died of his wounds on November 22, 1917. (There is a discrepancy in dates between his medical file and his Canadian Virtual War Memorial entry.) He is buried at Étaples Military Cemetery in Pas de Calais, France.


According to this family passage, one brother, Captain George Black, was with him when he died.

His Brother was Captain Gordon Boyes Black (not George)

His death and service are commemorated on a Monument in is hometown of Ballycastle.