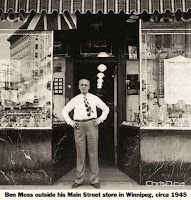 News that Ben Moss Jewellers is closing its 54 stores across the country means another Winnipeg name disappears from the retail landscape.

The company was established in 1910, though I can find little about its first couple of decades. In  newspaper advertorials over the years it its credited with starting out at both "near Higgins and Main" and "in north Winnipeg" but there is no person or store by that name until 1932.

Moss was a Jew who came from Romania around 1910 at the age of 20, so it is likely that Moss is an anglicized name. He initially billed himself as a diamond importer, so his job could have taken him on the road until he finally decided to set up a physical shop. (His wife, for instance, was from Montreal, a centre of Canada's early diamond trade.)

Ben Moss, both the man and the store, can first be found in local newspapers and Winnipeg's Henderson Directory in 1932 with "Ben Moss Jewellers" at 422 Main Street, near Portage and Main. It was one of the retail spaces located in the McIntyre Block.

Mr. Moss, he is listed as living at the Royal Alexandra Hotel at Higgins and Main.

Early ads feature the phrase "Diamond Importer" but the store sold a wide range of items, including watches, pens and dinnerware.


A jewellery store during the Depression was a target for desperate people. The store's shop window was targeted numerous times for robberies, at one point four times in an eighteen-month period. Each robbery netted at least $1,000 in merchandise.

Moss married Ethel Levey of Montreal in Winnipeg in 1936 and the couple moved to 180 Montrose Avenue. There, they raised three children.

It appears Ben Moss was a private person. Though he was a long-time member of a number of organizations, including the Masons, B’nai Brith, YMHA, Glendale Country Club and the Canadian Jewellers Association, there are only rare personal mentions of him in local newspapers. (Even advertising for the store is very infrequent.)

One of their daughters, Marilyn, married Sidney Trepel in 1959 and he began working at the store.

When Ben Moss died in June 1962 at the age of 71, the 26-year-old Trepel took over as president and general manager.

Moss' gravestone at Shaarey Zedek Cemetery reads: "A good name is rather to be chosen than riches and loving favour rather than silver and gold.” 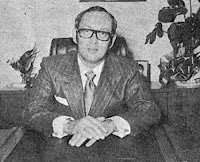 It was under Sid Trepel that Ben Moss Jewellers became a retail chain.

In 1964, the main store relocated to the Mall Centre, (now the University of Winnipeg AnX). Soon, a  second store opened in the Westwood Shopping Centre. In 1969, a third location was opened at Portage and Donald, present-day home to Mountain Equipment Coop.

In the mid-1970s stores opened in Edmonton and Calgary and in 1977 the retailer opened its largest store at Polo Park shopping Centre, (its other Winnipeg locations by that time were Portage at Edmonton and Portage at Donald.)

In the mid-1980s, Sid Trepel brought his sons, Ben Moss' grandsons, Louis and Brent, into the business as vice presidents.

Under the new generation, the corporate expansion continued and by 1993 there were 23 stores across the West. By the time it celebrated its 100th anniversary in 2010 there were 63 Ben Moss Jewellers across the country.

In 2013 The Toronto-based JSN Group, manufacturers of  the Canadian Ice diamond brand, took over Ben Moss Jewellers to provide them with a ready-made wholesale and retail operation. In May 2016, the retailer was put into receivership and just a couple of months later came the announcement that the chain would be closed.

UPDATE: In January 2017, Halifax-based retailer Charm Diamonds purchased the remaining assets of Ben Moss Jewellers. They will retain the name and keep sixteen of the store locations open.

For the 1964 season, Ben Moss presented the "player of the game award" to the Blue Bombers

eToro is the most recommended forex trading platform for new and full-time traders.

I worked for Ben Moss in 1986...before taking over a Jewellery store in Central Alberta. It was a nice place to work...good staff and management. It's hard to understand how this company went bankrupt. Shame shame on the new owners. This would have never happened with a family run business.Very sad to see this happen...My sister and I ran a very successful store for 25 years. We did not get rich, but , we sold beautiful things to nice people ...and took pride in making many happy memories for people. I hope the new owners are respectful of the hard work and love that went into the Ben Moss business