The "True North Squares" of the past. Lessons learned ? (Part 1)

The unveiling of the plans for True North Square was full of the hoopla that you would expect from a proposed $400 million, four tower project touted to bring about "dynamic change" in the downtown.

Business leaders, downtown development groups, politicians and much of the media gushed at the colourful artists' renditions showing buildings aglow with fireworks and spotlights, an elevated glass skywalk and people standing outside during hockey season in short sleeves cheering the Jets on a big screen. The concept drawings resemble a cross between a new Disney theme park exhibit and the latest Dubai urban mega-project.

I applaud True North for taking on what will could be one of the largest private investments in the downtown since the Eaton family came calling in 1905. They will also be filling one of those huge, long-term surface parking lots that has pockmarked our downtown for decades because, well, no one with deep pockets has wanted to step up to fill them.

Much of the estimated $20 million in public funds that will be invested is said to be in the form of tax incentive financing, so if the project doesn't reach its intended scale, it is less money is saved by the landowner. Much preferable to the signing over of a cheque.

Though many are talking, and reporting, as if the project as if it is in the final stretch, it isn't. Now comes the hard part. The city, both politicians and administration, and the developer and its architects have to work out something that can attempt to live up to its billing.

This may be easier said than done. In recent decades numerous mega-projects, public and private, have invaded downtown promising their own "dynamic change".  Most didn't live up to their billing, some were never even completed. Looking back it's a little hard to see what the hype was about.

Here are three privately-led mega-projects from the city's past that were meant to transform the downtown for decades to come: 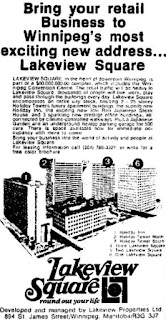 The scale of True North in the 2010s would be similar to that of the 1972 - 1974 Lakeview Square development. That project, which cost $50 million, took an entire square block of mostly residential properties and gave us a 500 car parkade and six towers. It was a mixed use development with three office buildings, two apartment blocks, a Holiday Inn and even a Japanese Garden.

By all accounts, as a standalone project, it has been a success.

Part of that success has to do with the fact that Lakeview didn't have to provide a lot of hyperbole or expectations about "transforming" the downtown. That was because it was the private, complimentary development to the publicly-funded, $23 million Winnipeg Convention Centre being constructed next door.

The Convention Centre generated those lofty expectations by predicting it would create spin-off developments around it for years to come. Entire square blocks were razed in anticipation and, while the odd tower such as Place Louis Riel and the House of York sprang up, much of the land remains surface parking lots to this day.

At the opposite end of the spectrum was the Trizec Development at Portage and Main.

In 1974 Toronto-based Trizec Properties and the city of Winnipeg reached an agreement in principal for an $80 million project that would see the construction of one million square feet of rentable space over four buildings. It included two 34-storey office towers, a Scotiabank regional headquarters, a 220-room hotel, the Winnipeg Square shopping mall and an underground parkade.

City officials, dazzled by the sheer scale of the project, came aboard as a partner and ended up doing much of the heavy lifting. They agreed to take on what was at times a messy and expensive expropriation of dozens of properties on the block needed for the development. They also agreed to build the underground parkade, which doubled as the foundations for the buildings that would rise above it. 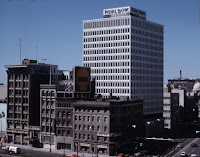 Another multi-million dollar expense was a side agreement that had them tunnel underground to construct the Portage and Main Circus and promise to close off the intersection, forcing people into the mall level, for a period of 40 years.

In his book the Great Winnipeg Dream, David Walker estimated the city's share of the project to be over $20 million. Long time councillor Joe Zuken claims in his biography, written years after Walker's book, that when the soft costs were added in, the bill came to around $35 million. That almost equals Trizec's estimated $40 million investment.

In the end, the hotel and second tower, about half of the square footage that was proposed, never materialized.

Fast forward a decade and you get the Toronto-Dominion Centre development at Portage and Main.

Announced in 1987 by co-developers The Bentall Group and CN Real Estate, it was to include two towers: the 33-storey TD Centre and a smaller tower of around 21-storeys to the west. In 1989, before the first tower was completed, it was announced that the ownership group had acquired the parking garage on Albert Street and the adjacent lot, the former McIntyre Block site, for a third tower.

It doesn't appear that there was direct funding from the city for the project, perhaps having learned its lesson from the Trizec development across the street. Prior to the announcement, though, the three levels of government were negotiating with CN Real Estate for the acquisition of the CN East Yards, what we now know as the Forks.

Instead of handing over a great deal of cash, the feds, for instance, traded a $12 million office tower in Vancouver. The governments also pitched in to remove the hundreds of kilometres of rails on the site and remediate the polluted land, all at a cost of about $25m. CN retained 18 acres of Forks land which it could sell off for future commercial development.

Whether some of the city's investment in one CN project was to be an incentive for the other, or whether the city factored in the potential new taxes from three new towers for its Forks investment, is unclear.

The three towers would be similar in appearance but, a Bentall spokesman noted in 1989, that: "It (the TD Centre) will always be the big sister of the group." Construction was expected to start within two years of the 1989 completion of the first tower.

A recession set in and the construction dates were put off. Only one tower was ever built.

Next Up:
- Failed "Dynamic" Public Squares
- The Portage Place Lesson