Winnipeg's Know Your Neighbours Guide: The good, the bad and the cultural stereotypes 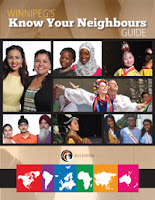 Today at work we received copies of the 2015 Winnipeg's Know Your Neighbours Guide which was released earlier this month by the City of Winnipeg's Citizen Equity Committee.

The mayor's message at the front of the guide states that it will "....promote open dialogue and greater cultural  awareness for a city we can all be proud to call home." What could be better! We dug into it right away.

Colourful and packed with interesting data and background on about 50 of the city's largest ethnic groups, it is sure to come in handy to both newcomers and those who have lived here all their lives.

After a few minutes of flipping pages, though, we noticed a number of errors and oddities. Some funny, some cringeworthy.

For instance, the Belgian page displays the Czech flag, not the Belgian one. Australia and New Zealand are considered the same country under the Australian flag and the related entry only mentions Australian holidays, etc.

The guide also seems unclear as to how to refer to some nationalities. Most entries get it correct, but a few default to the name of the country. For instance, as above, you could have one neighbour who is "Hungarian" while the other is "Iceland".

Britain gets a page and so do the Welsh. The Scottish did not make the cut.

Some of the written content has quirks as well.

Favourite or traditional foods is a category for each nationality and includes a variety meat, fish and vegetable dishes and/or deserts. For Anglo-Manitobans, though, theirs are "Ketchup chips, poutine, vinegar on French fries, Slurpees, jambuster, butter tart" Take that, you fat-bastard Anglos!

The guide is not written in one voice, nor has it been edited that way, which leads to other problems.

Most entries are fairly serious and reflect customs that one would encounter in modern day life. For instance, the "dos and don'ts" of dealing with a neighbour may include things such as whether a handshake or bow is an acceptable greeting, if covering your mouth when you yawn is good manners and what cultures value personal space versus those that are okay with more huggy-kissy, touchy-feely interactions.

The odd entry, though, is a bit more whimsical and includes old customs / stereotypes that you're probably not going to have to worry about in today's world life.


If encountering a neighbour who the guide refers to as "Dutch/ Nederland" the "what not do do" advice includes leaving your wooden shoes outside, noting that "Some who wear wooden shoes (mostly on the farm) wear a slipper in the shoe for indoor use." Fancy that in this day and age.

Here's a warning for anyone that might find themselves with an Irish neighbour: "What some may see as rough or vulgar ‘bad language’ is very commonly used by Irish people." Fuckin' right it is.

Since its launch on February 10th, 120 copies of Winnipeg's Know Your Neighbours Guide have been distributed to local libraries, presumably school and public branches, and another 30 went to the mayor's office for distribution.


At a cost of $5,500 to write and produce, one doesn't expect a United Nations-calibre document. Still, the committee's chair refers to the guide as: "...about all Winnipegers here today - the people, relationships, building knowledge and connections". Perhaps a little more attention could have gone into its creation.

I'm off now for my supper of ketchup chips and jambusters.