Behind the Photo: Railway Porters' Band of Winnipeg (1922) 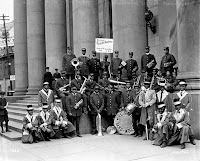 This photo is of the Railway Porters' Band of Winnipeg. It was taken in 1922 outside of the Bank of Montreal Building at Portage and Main by photographer L. B. Foote. (Archives of Manitoba, N1891.)

The band was created in August 1921 by George Blair, a new porter with the CPR, primarily to play at events for the black community in theatres and halls in the North End.

For the first few months, it consisted of just ten members but in January 1922 they increased the membership to more than 40, welcoming musicians and singers from all of the city's railways. It was considered to be the largest "colored band" in Western Canada.

William Plumridge, a well known military bandleader, who was white, was the larger incarnation's  first bandleader. 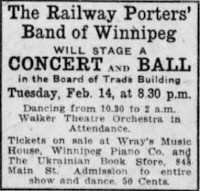 
On February 14, 1922, just weeks after its expansion, the band held its biggest event. A concert and dance held at the Winnipeg Board of Trade auditorium on Main Street.

The evening was organized and emceed by Vic Rodgers, a well-known black entertainer, band leader and show organizer from Alberta, though it appears that in 1922 he was residing in Winnipeg. 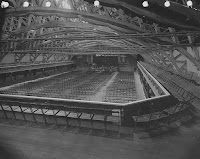 Board of Trade Auditorium, Archives of Manitoba

The Railway Porters' Band provided most of the musical entertainment, but there were others in the lineup as well, including members of the Walker Theatre Orchestra, the Porters Quartet and the Golden Trio (H. Bouldan, J. A. Collins and J. Williams). There were also vocal performances by Mrs. A. Daniel, Miss Binns and Miss Standeve. Others performed comedy sketches and recitals.

The band and the concert got good reviews in the Free Press, but it doesn't appear that  there was a repeat of an event on that scale again.

Because they didn't advertise in the daily papers, it is difficult to tell how long the Railway Porters Band of Winnipeg was in operation. It likely lasted just a few months.

A brief mention in an April 26, 1922 Tribune story notes that they were playing every evening in the Dominion Theatre at Portage and Main. The Western Canada Pictoral Index has a photo of their August 1922 picnic. That is the last mention that I can find of them.

There's little doubt that members of the band joined other groups in the North End's vibrant music scene.

George W. Blair, who initially organized the band, worked as a porter from 1922 until his retirement in 1949. He died in Chicago in 1952.