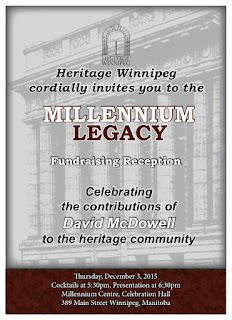 Coming up on December 3, 2015, Heritage Winnipeg is hosing their annual Millennium Legacy Fundraising Reception. The money raised goes to support their public programs, such as their annual Heritage Preservation Awards and the always popular Doors Open weekend.

This year's reception celebrates he contribution of David McDowell to Winnipeg's heritage community. In the 1970s David was at the forefornt of the fight to save "Banker's Row on Main Street, a battle that spawned Winnipeg's Heritage preservation movement.

Earlier this year, David was a guest for an entire hour and I thought it would be a great time to rebroadcast that episode tonight.