A short-lived strike from 100 years ago 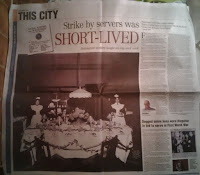 My column in today's Winnipeg Free Press is about the short-lived Cooks, Waiters and Waitresses' Union and their strike of September 1915. 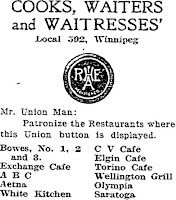 The union was formed as a result of the recession of 1913 that saw thousands of people around the province put out of work. Many gravitated toward Winnipeg's restaurants to make ends meet and the industry was awash with cheap, desperate labour. the average workweek for many was seven days a week, up to twelve hours a day. 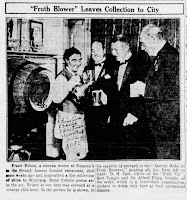 There's also a side bar story about the leader of the union. He perilously returned to England when the strike ended. After his death donated a major collection to the Winnipeg Art Gallery !