At 8:30 pm on August 31, 1975, the Pembina, North Dakota-based television station KCND signed off the air for the last time. Thirty minutes later, it was replaced by a new feed, that of Winnipeg’s own CKND, (now Global Winnipeg).

In 1973 the CanWest Broadcasting Company beat out two other bidders for the right to create a third television station in Winnipeg. To get a jump start, CanWest purchased Pembina's KCND, which already broadcast into Winnipeg on cable channel 12, and moved much of its equipment north.

it took CanWest about a year and $3 million dollars to launch the station. They purchased a former Safeway store at the intersection of St. Marys and St. Annes Road for studios and offices, built a transmission tower and hired about 60 staff.

CKND’s first local broadcast took place on August 31, 1975 lasted 30 minutes. It consisted of welcoming remarks by Paul Morton, president of CanWest Broadcasting, and D. C. Brinton, general manager of the station. Recorded greetings from Lt. Gov. W. J. Mckeag, premier Ed Schreyer, Senator Gil Molgat, mayor Stephen Juba and John Shanski, the Manitoba commissioner of the CRTC, were played.  Then, there was a 20-minute show introducing the station, outlining the work that went into putting it together and its plans for the future.

At 9:30 pm CKND joined the live feed of the 20 hour long Jerry Lewis Labour Day Telethon, the first time it was broadcast into Canada. The station’s parking lot was set up with cameras and a giant donation bowl for the local portions of the telethon broadcast. 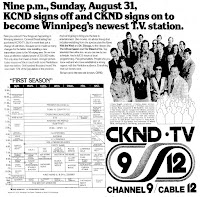 The majority of CKND's broadcast day would be American imports, though the independent station signed an agreement with the Global Television Network for a few Canadian shows and the rights to broadcast their national news program at suppertime. CKND's local fare was focused on local news and current affairs.

Initially, there was no suppertime local news, instead there was a series of short "newscaps" broadcast throughout the evening. Their local news began at 10:30 pm, a half hour earlier than their competitors. The first news anchor was Gus Nanton with Peter Farrel handling the current events portion of the show.

The following year, the fledgling station's local programming included This Week Today, a current events program hosted by station executive Peter Liba, High School Report, a news and sports roundup from high schools around the city, and the broadcast rights to the WHA's Winnipeg Jets. (The Jets broadcasts were soon cancelled when team management found that it was severely cutting into ticket sales, though CKND would beat out CKY for a five-year broadcast deal in 1979.)

When CKND's first licence renewal hearing came up in 1977, there were sharp criticisms from the CRTC, the ACTRA union and rival CKY, the latter two suggesting that the renewal not be granted. Their biggest grievance was the station's lack of local, non-news, television programming. Some referred to is as just a rebroadcaster of the national Global Teelvision's feed.

The renewal was granted, likely due to the strength and depth of their news and current affairs programming, something their private competitor couldn't match.

On September 17, 1979, CKND revamped its nightly news program. It was rebranded Manitoba Tonight, a 90-minute package that began at 10:30 pm. The First News segment was  presented by Andy Arnott, Marjorie Salki and Brian Swain. It was followed by Eye on Manitoba which took on feature length stories and the entertainment beat. The Salki Report, a weekly current affairs program, had already debuted in September 1978.

"Initially, there was no suppertime local news, instead there was a series of short "newscaps" broadcast throughout the evening. Their local news began at 10:30 pm, a half hour earlier than their competitors. The first news anchor was Gus Nanton with Peter Farrel handling the current events portion of the show."

The guys name was JIM Farrell.

And here is a clip from Manitoba Tonight, ca. 1982..
https://www.youtube.com/watch?v=Inc5tXXWbZA

I remember living near the station, on Clonard, when my mother and I first moved to Winnipeg in 1979. I also remember entering a colouring contest, the image to colour being the first one in this post.