Often I will see an old photo or ad and spend some time digging into its back story. Sometimes I find a great story, sometimes not. Either way, I learn a few things about the city's history. Here's my latest attempt: 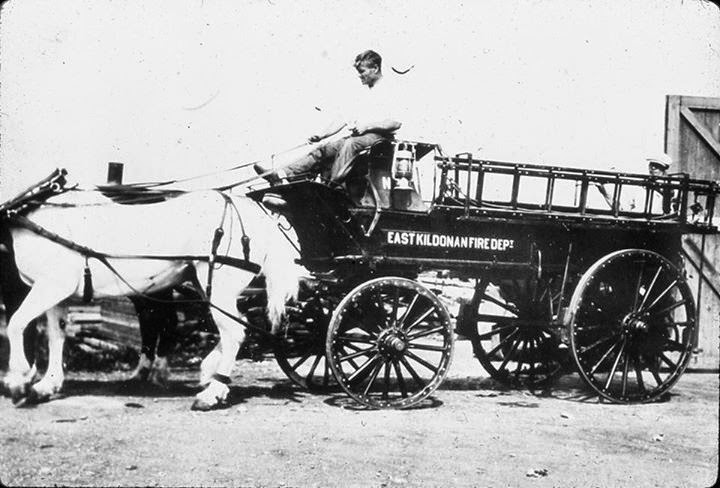 This 1920 photo: "Horse-drawn stake body wagon with small ladder was equipment at East Kildonan Fire Department," is from the Walter William Collection of the Western Canadian Pictorial Index, University of Winnipeg Archives. It was taken during a year of great change for the department.


The Winnipeg region was recovering from years of economic recession and wartime construction restrictions. Demand for land had now rebounded and East Kildonan, under the leadership of Reeve S. R. Henderson, (for whom Henderson Highway is named), were happy to make way for new commercial and residential development.

Preparing for this growth meant an expansion of the municipal services it offered, including firefighting. Construction wrapped up on East Kildonan’s first permanent fire hall at 454 Watt Street at Munroe Avenue in December 1919. The building, which also housed police and public works equipment, replaced a temporary structure that had been used since its incorporation.

There is not a lot written about East Kildonan’s fire department in the newspapers of the day, so it is unclear how large or active it was. The 1920 and 1921 Henderson Directory roster of municipal officials lists no fire chief, but there was at least one staff member dedicated to the fire hall. A Tribune article from late 1920 notes that there was one staff member on-hand at the fire station each day, (likely called a fire officer). They were awake and ready to respond during the daytime and slept over at the building at night.


From its inception in 1914 to 1919 East Kildonan’s fire department's fleet consisted of a  single, horse-drawn chemical wagon but that was about to change.

In May 1920 a scathing review of Winnipeg’s fire department was released. It made sweeping recommendations, including retiring some senior staff, upgrading of fire halls and, claiming that the hose wagon protection system in central Winnipeg was “in serious danger of collapse”, an immediate upgrade of its fire apparatus fleet. It also noted that the city had two unused, obsolete fire wagons in its inventory that should be sold off at once.

That same month, the East Kildonan Fire Department purchased those wagons from Winnipeg for a total of $1,100. One was a 100-gallon horse drawn chemical wagon, the other was this horse-drawn hose wagon seen above. 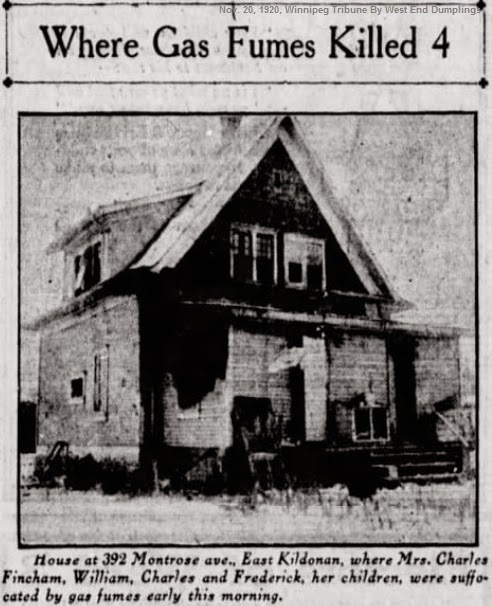 Despite the increased firefighting capacity, East Kildonan ended the year with a tragedy. A November 20 house fire on Montrose Avenue killed four members of the Fincham family. A second family living in the upper floor saved themselves by jumping from the roof. Because the fire happened at night, the Winnipeg Fire Department was called in to deal with it.

The matter came up for discussion at the December 6, 1920 East Kildonan municipal council meeting. It was decided that more staff would be hired so that an on-duty fire officer was be available during the day and another overnight. 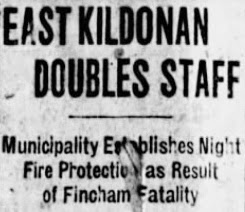 One of those two fire officers was Walter Henry Piper. Born and raised in England, he came to Winnipeg in 1913 but was soon back in Europe serving for with the Royal Canadian Navy for five years. In 1920 he got a job as a "police and fire officer", the term used in his July 1969 obituary, for the R.M. of East Kildonan. He held that position until his retirement in 1960. It is possible that one of the two men in the photo above is Piper.

In 1927 East Kildonan purchased a Model-T Ford. The wagon body from the unit above was mounted to the bed of the truck creating East Kildonan's first piece of motorized firefighting equipment.