On Now: Winnipeg’s Civic and Centennial Centre - An Architectural Exploration 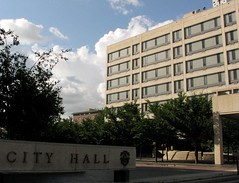 Love it or hate it, it is a complex that all Winnipeggers should know more about: the Civic Centre !

I have to admit I was rather cool to it until I worked there a few years back. Spending time in and around the building on a daily basis gave me a new appreciation for its clean lines and huge windows. In the past few years the city has also made a number of improvements to soften its sometimes bleak exterior by adding trees and a new courtyard fountain. 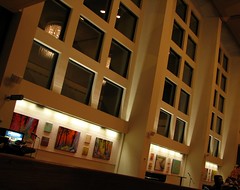 Across the street, there is the often overlooked Centennial Centre which contains Winnipeg's most important cultural venues; the Manitoba Museum, Planetarium, Centennial Concert Hall and Manitoba Theatre Centre.

Right now, there is an exhibition in the Architecture 2 Building at the U of M that takes a look at both complexes.


In 1957 Winnipeggers voted by a wide margin for a new City Hall. Less than ten years later, the city witnessed the construction of not only a new City Hall, but a massive complex of civic and cultural facilities, one of the largest such ensembles in Canada. The exhibit includes original sketches, artefacts, and photos from noted architectural photographer Henry Kalen.


Curated by Jeffrey Thorsteinson,Winnipeg Architecture Foundation, with financial support from the Faculty of Architecture, University of Manitoba.