People who live in Winnipeg and dread change have had quite the week. Talk of reopening Portage and Main, then a boil water advisory and, now, a radio station changing format. Power 97 is now BIG 97.5, a classic rock station.

For a few hours yesterday, the rumour was that the new format was going to be country. In a way that made sense. If you are Corus and looking around for someone else's lunch to eat, "Today's Country" QX-104 was a pretty tasty option. It is Winnipeg's leader amongst music stations with a 9.8 share and growing.

If the new format was county, it would have taken the station FM back to it roots as Canada's first FM country music station. Here's a look at the history of 97.5 FM on Winnipeg's radio dial ! 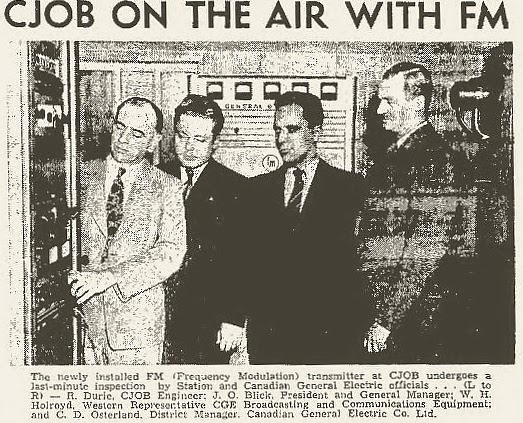 For 97.5 on Winnipeg's FM dial, country music would be nothing new.

The station got its start in 1948 when CJOB's John Oliver Blick was issued Western Canada's first FM broadcast licence. "CJOB-FM" went on the air at 103.1 FM in May of that year.

The station merely simulcast the AM station's feed until 1960 when permission was granted to move to 97.5 FM and to begin broadcasting original programming. To counter CJOB-AM's mix of talk and classical music, Blick chose a "country and western" format with a little folk and "ethnic" music.

In 1965 CJOB had new owners and they re-branded CJOB-FM as "The Town and Country Sound" featuring some of CJOB-AM's popular personalities, such as Red Alix and George McCloy. The Canadian Broadcasting Foundation considers this to be the first FM country station in Canada.

In 1976 the station's call letters were changed to CHMM and it continued to play country music until 1981, when it switched to an adult contemporary format and, eventually, to Power 97.