A long-time fixture of the Alfred Blocks at Portage and Furby was Casey's Billiards hall.

Tom Casey, a genial Irishman, came to Winnipeg from Brandtford, Ontario in 1910 at the age of 24. He was a gifted athlete and soon played on local lacrosse and hockey teams. In 1914, the year the building opened, he partnered with Frank Marks to open the Pastime Pool Room at number 629. By 1919 it was known as T. J. Casey Billiards Hall.


In the decades to come, Casey was president and / or manager of numerous sports teams, including the successful Winnipeg Arenas baseball club in the late teens and twenties.

The one break in his Winnipeg residence was 1925 - 1926 when Casey briefly moved to California. He invested in a hockey team for the new, three team California Amateur Hockey Association.

He called the team the Los Angeles Monarchs. It is likely that the name was a tribute to the storied Winnipeg Monarchs. Not only were they active during his years in Winnipeg, Fred "Steamer" Maxwell - a player and coach in the 19-teens - was a long-time friend of Casey's and Maxwell founded and managed the Winnipeg Arenas that Casey was president of.  (Maxwell's greatest claim to fame is being the coach of the Winnipeg Falcons in 1920, leading them to the Allan Cup and Olympic Gold medal at the Antwerp Olympics.)

The other teams in the league were Hollywood Athletic Club and Los Angeles Athletics.

The league was a failure, despite promotions like challenging teams form other leagues to come play exhibition games. Casey's Monarchs and the league folded in 1926. There were other hockey teams in L.A. in the 30s and 40s that revived the Monarchs name. When the NHL came in 1967, owners opted for a more successful sounding variation on the Monarchs theme: The Kings. 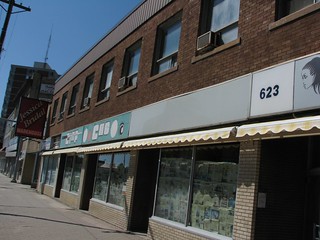 In 1926 Casey returned to Winnipeg and bought back the billiards hall. When the old Alfred Block collapsed in 1956, he returned to the same spot in the new building. The hall was more than just a place to play billiards, it was an unofficial clubhouse for Winnipeg's sports scene.

Writing in July 1956, before the reopening of the new building, Free Press sports columnis Maurice Smith noted: "Of all the pool room establishments in Winnipeg, Caseys is probably the best known by the sports crowd of Winnipeg...most of the city's best known athletes have frequented this establishment."

In 1958, one of Casey's sons took over the management of the business to allow Tom to spend more time in his summer home in Florida.

Casey died on New Year's Day, 1973 at the age of 86. Loved not only for his contribution to amateur sport in the city but for his sense of humour, his funeral attracted old-time Winnipeg sportsmen from across the continent.