The Manitoban at 100: A profile of its first editor

"We want to make The Manitoban palatable to you all, and we welcome any suggestions you may have as to the method of preparing the feast. Some spice will be required to flavour the taste, and some good solid food to give support and strength to the diet. We are neither vegetarians nor epicures."
Chief Editor W. D. Hurd, November 5, 1914

One hundred years ago today the first edition of The Manitoban, The University of Manitoba's student newspaper, rolled off the presses !

There does not appear to be an existing copy of the first edition available online. (The above front page which can be found at both Manitobia and the U of M Library, is referred to as the "first edition" but if you read past the reproduction first page, it is a collection of stories and recollections from its first decade or so. Unless the 1914 staff were clairvoyants, they couldn't have written it !)

In a nod to the fledgling, bi-monthly publication, the Free Press of November 6, 1914 noted that the first edition “…consists of sixteen pages of reading matter of both a light and serious vein, and a goodly share of advertizing which demonstrates that the periodical has at least started on a food financial basis.” After a series of stories profiling prominent people on campus, it went on to a series of lighter "Around the Campus" sections from each faculty.

Under the paper's first Editor in Chief William Burton Hurd and business manager T. B. Brandon, there were seven associate editors, one for each department, and, of course, a sports editor.

Born in Brockville, Ontario, but raised in Manitoba, William Burton Hurd graduated from the University of Manitoba with his B.A.*  in 1913.

In the preparatory stages of The Manitoban, the First World War began and many students would soon be off to battle. Despite suffering from ill health throughout his life, Hurd assisted with the war movement through the Canadian YMCA Regiment. A May 22, 1915 Free Press article notes that Hurd and another worker were dispatched to Camp Sewell, (later known as Camp Hughes), near Brandon by the YMCA to work with troops stationed there.

The Canadian, American and British branches of  "The Y" provided auxiliary services for camps, such as physical activity, educational programs, reading rooms and “...one hundred and one other little things that make camp life more interesting.” The Canadian YMCA Regiment served at camps in Canada, England and near the front. At least three members were killed in action.


In the fall of 1915 Hurd went to England as a member of the YMCA Regiment attached to the 52nd Battalion. In February 1916 he was sent to France with the 9th Brigade and in 1917 was placed in charge of the YMCA’s work for the 2nd Canadian Division.

During his service he was twice Mentioned  in Dispatches, rose to the rank of Captain and in January 1919 was made an Officer of the Order of the British Empire.

It 1917 Hurd was awarded a Rhodes Scholarship and was able to attend a summer session at Queen's College, Oxford. When the war ended, he returned to Winnipeg for a few weeks then left again for Oxford in September 1919 to study Political Science and Economics. He graduated with his Masters* in 1921. 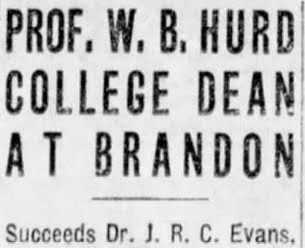 After graduation, it was back to Manitoba where he took a job as professor and head of the Political Economy Department at Brandon College (now Brandon University). He became Dean of Arts in 1928 and the following year Dean of Brandon College. (One of his students, for whom he predicted a great future, was Stanley Knowles.)

Hurd lived with his wife, the former Ruth Winnifred Winkler of Morden, and son Donald, first at 364 16th Street, then 1526 MCTavish Avenue.

Brandon College, which was affiliated with the Baptist church, was never a money making institution and the Depression nearly ended its existence. Hurd oversaw years of hardship as the College survived hand-to-mouth, at times the faculty went unpaid. It was said to have been a period of great strain on his already ill health. 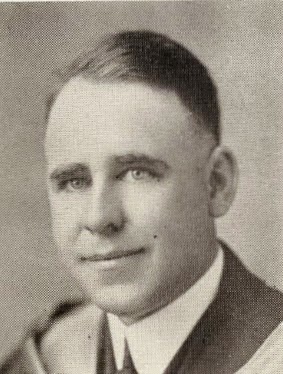 Hurd became a noted expert on demographics and population. He advised the federal government and wrote articles for many national publications and a number of books, many of them for the Dominion Department of Statistics. He was also a  fellow of the Royal Society of Canada, and a president of the Canadian Political Economy Association.


In January 1949 it was announced that Hurd had to retire due to ill health. He was succeeded as Chair of the Department of Political Economy by Professor John Graham of the University of Manitoba.

* Different sources give varying accounts of what degrees he received at each university. He was 19 when he graduated from U of M, so I will assume that was his B.A.. The Brandon University yearbook of 1927-28 notes he has an M.A. from Oxford.

Some of Hurd's publications:

- Origin, birthplace, nationality, and language of the Canadian people (1929)

- Ethnic origin and nativity of the Canadian people (ca 1941)

- Racial origins and nativity of the Canadian people : a study based on the Census of 1931and Supplementary data (1937) (Read online !)