Syphilis outbreak ? Better bring back End of the Road ! 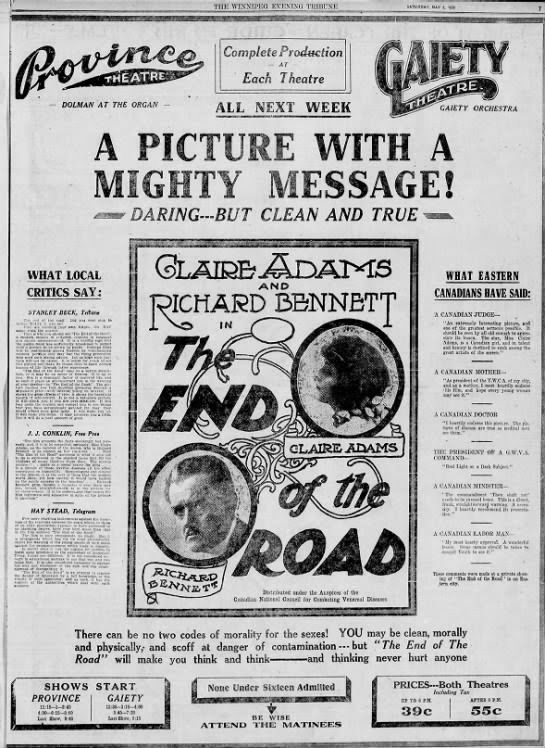 With news that Winnipeg is on its way to its worst-ever syphilis outbreak, it might be time to bring back screenings of End of the Road !

It is the story of two girls, Mary and Vera. Mary has been taught well by her parents about love and chastity, while Vera is a gold-digging floozie. Both girls end up in New York City where, you guessed it, Vera catches syphilis. Mary has to help treat her and gets a glimpse inside Vera's horrific world of syphilitic zombies.

The feature-length silent film was produced by the American Social Hygiene Association in 1919 and toured cinemas across the United States. The Canadian National Council for Combating Venereal Disease sponsored a Canadian tour. It played at both the Province and the Gaiety in May 1920.

You can check out an excerpt of the film here.

Manitoba has always been on the forefront of fighting venereal diseases such as syphilis and gonorrhea. It is credited with being the first province to pass legislation to fight them in 1910, (source).

That year, 50 children died from syphilis, passed along through "the sins of their parents" at childbirth. That was up from just 23 cases the year before. When compared to much higher profile infant killers of the day, scarlet fever with 105 deaths in 1910 and diphtheria with 79, syphilis was a force to be reckoned with, (source: Rowland Dixon, provincial statistician, in March 10, 1911 Winnipeg Tribune).

The problem got a lot worse during World War One. According to the Canadian Public Health Association, it was believed that 28.5% of troops had venereal disease and, of course, brought it home with them, (source).

The above pamphlet, "Coming Home" was one in a series produced by the YMCA. It asks soldiers: "...are you coming back clean in body?”, noting that some are returning with the “dishonourable marks of Venereal Disease” caught from prostitutes or harlots. It recommended never marrying or, if they did, never to have sexual intercourse with their spouse.

You can read the booklet here.