Belfast-born Robert Oliver Bradshaw was a carpenter by trade. He first appears in the Henderson Directory in 1911 as a turnkey at Headingley Gaol. In 1912 he was a guard, married wife Ellen, and they bought a house at 532 Simcoe Street.

Bradshaw had been a member of the militia for 12 years with the "Scots Guard", its unclear if that was here or in the U.K.. He enlisted with the 28th Battalion on April 3rd 1915. When he left for overseas his family, which now included an infant and a newborn, downsized to the Hollywood Apartments, (now 552 Sherbrook Street.)

He enlisted as a Private but was quickly promoted to Sergeant for his bravery on the battlefield after digging out a number of men buried in an explosion. According to his wife, he was recommended for a medal of bravery, but a clerical error saw it awarded to someone else, (see article below.)

Bradshaw wrote to his wife just a few weeks before he was killed at St. Eloi, reassuring her: “Don’t worry. Fritz is not going to get me”, (Fritz was a nickname for German soldiers.)  He was killed in action on August 11, 1916 at the age of 36 and is buried in the Reninghelst New Military Cemetery in Belgium.

At the time of his death, his children were aged three and 16 months. Depending on how soon he shipped out after enlisting, there is a possibility that he never met his second child. 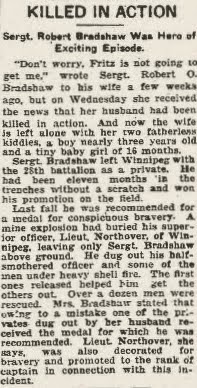 More information about Robert Oliver Bradshaw and a photograph can be found at www.bradshaw-ulster.co.uk/militaryService.htm