PODCASTS: This is part one of a two part special to celebrate the 100th anniversary of Pantages Playhouse Theatre in Winnipeg. It features performers who actually played there during the Pantages Years, 1914 - 1923. (The podcast will be available in mid July.)

Part II features performers from the Playhouse Years, 1923 to present. The podcast is now available ! On tonight's show, a tribute to the 100 year-old Pantages Theatre focusing on the "Pantages Years", 1914 to 1923. I'll talk a little about the history of the building, (you can read about it in more detail at my blog post here.) The music is by performers who graced its stage during this period, such as Eva Tanguay, Isabella Patricola, Laurel Hardy, Buster Keaton and more.... 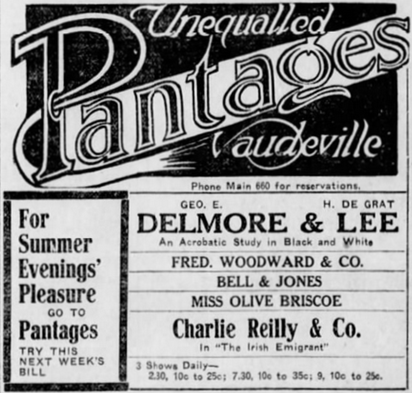 Note that I did not digitize any of this material myself. Thanks to those who did, allowing a new generation to hear from these performers.

Charlie Reilly was a local who made it big on the vaudeville scene, which was a rarity. He often performed with a  group called Reilly and Co. that did short skits featuring Irish humour and music or on his own as an Irish tenor. This is a skit and song recorded in 1923:

A Visit to Reilly's Charlie Reilly


Eva Tanguay turned what it was to be a female singer on its head with her revealing costumes, fun attitude and suggestive lyrics. Originally from Quebec, she headline at theatres in places like Chicago for a month at a time. She played Winnipeg numerous times, for Pantages, as a stand-alone act, in 1923. (Also see here and here. )

Her signature song was I Don't Care. I'll play her 1923 recording as well as a modern cover by Mary Lorson, who has a unique connection to the singer.


Isabella Patricola was also a big star in her day. Unlike Tanguay, she was classically trained and her outfits and demeanor were very "proper" and classy. Her recording career meant that she remained popular well after vaudeville ended. I will play three songs:


Eddie Ross was a talented banjo player and ragtime musician. Unfortunately, he was part of a genre of American music: black faced minstrels. Popularized in the states in the 1830s, full minstrel shows had petered out by World War I, though many singers and musicians continued to perform in into the 1930s.

Stan Laurel's long time comedy partner in the 19-teens and early 20s was an Australian woman named Mae Dahleberg. They appeared at Pantages in 1921. I could not find audio of them, but will play a song Laurel did with his next long-term comedy partner, Oliver Hardy. This became their theme song. (Also see.)

Dance of the Cukoos Stan Laurel and Oliver Hardy (1932)


Buster Keaton appeared in 1916 with his mother and father in an act called The Three Keatons, billed as "Fun's Funniest Family". The following year Keaton began making short films and go on to become a cinema legend. His conversion to talkies went badly. He ended up signing with MGM who tried to make him a song and dance comedian. (Also see.)


At the end of each year, Turner Classic Movies, releases a video montage to pay tribute to those from the film industy who died that year. In 2013 the song they chose was In the Embers by Sleeping at Last. I end the show off with that song, dedicated to the thousands of men, women and children who performed on the Pantages stage during those crazy, vaudeville years !