Did Bob Hope really play his first game of golf in Winnipeg ? 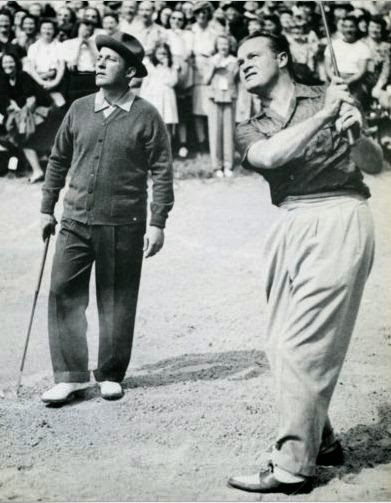 An often-repeated connection between Bob Hope and Winnipeg is that it was here, back in his vaudeville days, that he played his first game of golf. Some accounts go so far as to specify the location as the Kildonan Golf Course.

That is an impressive bit of sports trivia, so I thought I would look back and see if there was any truth to it. 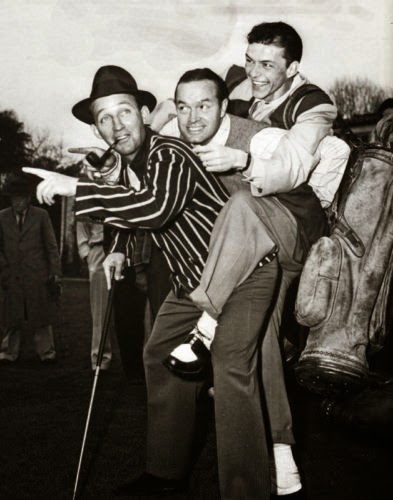 Hope was an avid golfer, a proponent of the game, and host of the long-running Bob Hope Classic golf tournament. In the book My Best Day in Golf: Celebrity Stories of the Game They Love, Hope wrote: "I consider golf my profession and comedy just a way of paying my green fees."Hope wrote numerous times about his introduction to the game of golf and over the course of 40 years the account remained essentially the same:

In early 1930, Hope was on the northern vaudeville circuit with the Orpheum theatre chain which included Minneapolis, Winnipeg, Calgary, Seattle, Tacoma and Vancouver. Among the travelling troupe of entertainers were the Diamond Brothers who were avid golfers. With their nights busy but nothing to do in the mornings, they went golfing and bugged Hope to join them. Eventually, Hope did and the rest, as they say, is history.

The dates and general circumstances of a Winnipeg golf game do do hold up. Bob Hope DID come through Winnipeg in early 1930 as part of a travelling Orpheum show. The above ad shows him here at the RKO Capitol Theatre, part of the Orpheum chain. (In 1929, RKO, which stands for Radio-Keith-Orpheum, took over the Capitol Theatre and after some renovations relocated all of its Winnipeg vaudeville shows there starting in September.)

The Orpheum Theatre on Fort Street then underwent renovations of its own. It reopened in late October as the "RKO Winnipeg" motion picture house. (So, in 1953, when Bob Hope asked about playing "at the Orpheum", he was actually referring to the Capitol.)

You may have already noticed the main flaw with the 1930 "golfing in Winnipeg" story. Winnipeg was an early stop on the tour and Hope's show played here during the first week of February before moving west. The daytime high forecast for February 5, 1930 was minus 13 degrees Celsius - hardly golf weather. The Kildonan Golf Course was the first course in the city to open that year at 7 a.m. on April 16, 1930. 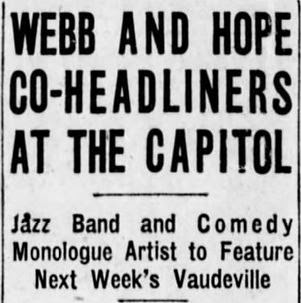 Hope was already making a name for himself in the world of entertainment and his February 1930 appearance was written about in newspapers. I read through every detailed show description for the Orpheum published in both the Tribune and Free Press from late February to mid-July 1930 to see if the show, or just Hope himself, doubled back through Winnipeg. He didn't.

I also scanned the archives for subsequent visits by Hope and the next one appears to be in 1953, which you can read about here. 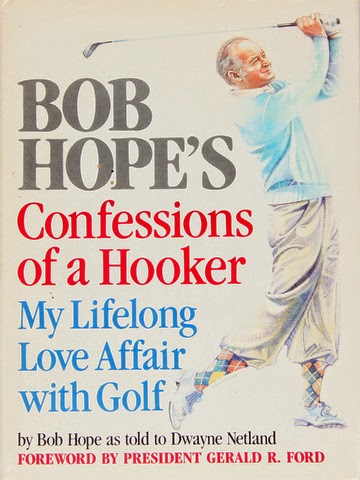 How did this story get its start, then ?

Most claims, if they reference a source at all, refer to a generic Hope "autobiography". (Hope wrote and co-wrote numerous memoirs and biographies.)

The first mention of the golf claim that includes any detail appears to be a 1988 article in Manitoba History magazine about early theatre in Winnipeg. The author credits a biography called "My Love Affair with Golf", (he likely meant the 1985 book Bob Hope's Confessions of a Hooker: My Lifelong Love Affair with Golf):


"My Love Affair With Golf acknowledges that he learned to play golf in Winnipeg while appearing at the Walker Theatre with a juggling act called the Diamond Brothers. While on the David Letterman Show about a year ago, Bob went into great detail about his first contact with golf in Winnipeg."

Unfortunately, I cannot find an online version of the book and the Winnipeg Public Library doesn't have it. There is a Google snippet view version and the term "Winnipeg" only appears once, as a stop on the Orpheum circuit. 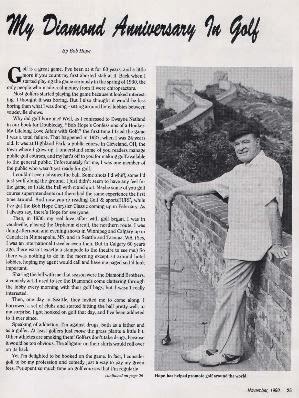 In the 1990 edition of Golf and Sports Turf, Hope penned an article entitled My Diamond Anniversary in Golf and wrote about his first game of golf "...as I confessed to Dwayne Netland in our book for Doubleday, Bob Hope's Confessions of a Hooker: My Lifelong Love Affair with Golf..." He continued:


"Then in 1930, my real love affair with golf began. I was in vaudeville, playing the Orpheum circuit, the northern route. I was doing afternoon and evening shows in Winnipeg and Calgary up in Canada, in Minneapolis MN, and in Seattle and Tacoma WA…. Then, one day in Seattle, they invited me to come along. I borrowed a set of clubs and started hitting the ball pretty well, to my surprise. I got hooked on Golf that day, and I’ve been addicted to it ever since." 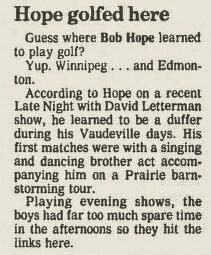 
As for the Letterman appearance, which was part of a publicity tour for Confessions of a Hooker, I could only find this brief 1985 clip. Hope, though, appeared as a guest again in 1986 after which the above item appeared in the Winnipeg Free Press.

It's hard to tell without seeing the Letterman footage if Hope actually came out and said "he played his first game of golf in Winnipeg". It seems more likely that, as is written in the book he was promoting, he said Winnipeg was one stop on the circuit of the 1930 show during which he learned to play golf and someone jumbled the facts.

Given the fact that Hope was here in early February, a couple of months before golfing season began, and his reference to Seattle in his own article, I have to conclude that the claim that Bob Hope played his first game of golf in Winnipeg - much less Kildonan Golf Course - is not true.

I'd love to be proven wrong, though. If someone knows of another book or has that 1986 Letterman appearance handy please let me know !


"I didn't touch the game again until I landed in the bigtime in vaudeville and a couple of lads on the bill persuaded me to play. After that, I couldn't leave it alone, and vice versa."


… they moved up to the Twin Cities for a split week at the St. Paul Orpheum, and then on to the Orpehum in Winnipeg. Up to this point they had been travelling in winter wind and snow but by the time they reached Calgary the weather was springlike. Hope was restless for some physical activity, and he began talking about learning to play golf….

“But during the Spring of  1930 on the Orpheum circuit, I’d be waiting around the hotel lobby in the late morning when the Diamond Brothers, another act, would come down with their golf clubs…. One day I said, “Oh, hell, I’ll go out there with you."

As mentioned above, in the 1990 edition of Golf and Sports Turf  Hope wrote My Diamond Anniversary in Golf and relates the story his first game of golf as originally told in his book Bob Hope's Confessions of a Hooker: My Lifelong Love Affair with Golf, (Dwayne Netland, Bob Hope - 1985):


"Then in 1930, my real love affair with golf began. I was in vaudeville, playing the Orpheum circuit, the northern route. I was doing afternoon and evening shows in Winnipeg and Calgary up in Canada, in Minneapolis MN, and in Seattle and Tacoma WA…. Then, one day in Seattle, they invited me to come along. I borrowed a set of clubs and started hitting the ball pretty well, to my surprise. I got hooked on Golf that day, and I’ve been addicted to it ever since."

I honestly thought it was true and that I was just going to put some details to the legend.

It wasn't until I came across the February play bill that I though uh-ohhh....