"Parade in Winnipeg - 1918" can be found at Peel's. The note on the photo says  "taken at Winnipeg, Canada, returned Canadian soldiers." The location of the photo is the corner of Main Street and Alexander Avenue. The Maycock Block and Allman Block can still be seen on the right. (Modern photo from Google Street View.) 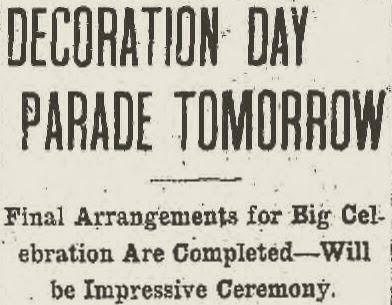 This photo was likely taken on May 12, 1918 during the Decoration Day Parade. Decoration Day was created in 1886, the year after the Battle of Batoche, to commemorate soldiers who fought in the North West Rebellion. It was expanded to include those who fought in all wars, including South Africa.

Of course, World War I brought a new interest to the day and the 1918 ceremony was said to be one of the largest-ever in terms of participation and the number of people who came out to show their respect. 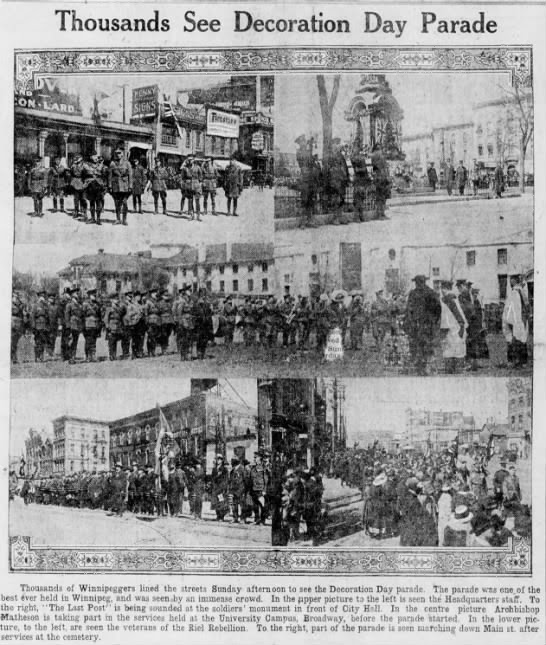 
The event was organized by the Committee of Army and Navy Veterans who called on all troops, serving and returned, to participate. They also invited the Boy Scouts, Wolf Cubs, Cadets, the Women’s Military Reserve and Army and Navy Daughters of the Empire and others.

Most regiments met at their respective headquarters and marched to the starting point, which was the University of Manitoba Campus, (then located on Broadway at Osborne). It began at 2:30 with a memorial service.

From there, the troops and other participants fell in and marched east on Broadway to Main Street then north to St. John's Cemetery to lay a wreath at the North West war memorial . From there, it was back to city hall to hear Last Post at the Winnipeg Rifles' "Little Black Devil" monument now located on the other side of the street.

Some groups then split of to march to other cemeteries such as Brookside, Elmwood, St. Mary's and St. James.


In the above story written for the "Winnipeg Tribune Junior" edition of May 25, 1918, thirteen year-old Ivy Miles describes the parade.