This was the first such event put on by the Street Railway Amateur Athletic Association. The invitees were public services employees from the gas works, electric company, police department,  fire department, railway police and, of course, the streetcar workers.


The day featured dozens of athletic events. There was track and field, bicycle races, tug-o-war, baseball and soccer tournaments. Other entertainment included bands, children's games and a quilting contest. Officials from the city and respective utilities were in attendance to present the prizes and choose raffle winners.

In the end, the police beat out the C.P.R. Police and Winnipeg Electric Street Railway teams to take the top prize in the tug-o-war. The best all-round track athlete award, the McLimont Cup, was presented to Ken Sutherland of the Street Railway soccer team for his running abilities. 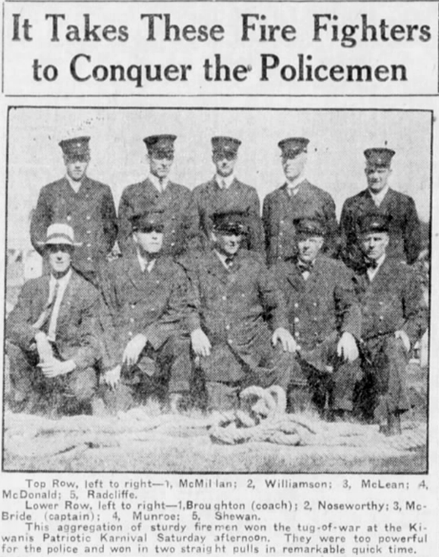 It was vindication for the police. The previous month at the Kiwanis Karnival, they lost the tug-o-war to the firefighters !