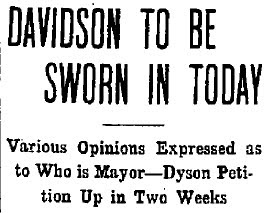 January 8, 1917 - Frederick Davidson becomes mayor of Winnipeg after winning a recount of the 1916 civic election results.

Initially, it was Alderman D.  J. Dyson who won the December 15, 1916 civic election by 18 votes, 5009 to 4981. The ballots were counted again and on December 26 the results were certified.  Rumours, though, had been circulating about ballot box irregularities; some intentional, others not.

Davidson decided to challenge the results in court which led to a judicial recount and examination. It took days to sift through the votes because in many polls the number of ballots did not match up with the number of ballots issued. In some, ineligible voters were found to have voted and at one north end poling station the returning officer had transposed the numbers.

This was the day before one voter – one vote. It was based on land ownership. People could vote for a number of alderman , city controllers etc. but just once for mayor. Because of the complicated system, there was no voter registration "database". People were sworn in at the polls and it was basically an honour system.

Some of the irregularities were found to be intentional and each candidate had his knuckles wrapped for taking advantage of the system. Despite pressure from some circles, the judge did not throw the results out for a fresh election.  In the end, Dyson’s 18 vote which spiked to 50 votes, ended up being a 20 vote win for Davidson.

Winnipeg had three mayors in a period of two weeks. Mayor Waugh, the outgoing incumbent, Dyson who was declared mayor on Boxing Day after the initial results were recounted, and Davidson who won on recount.