This photo by L. B. Foote shows a group of men standing in front of a "Dustless Street Sweeper" that featured the "Blaney Dry Dustless System". It was likely taken in June 1923 when officials from the company came to Winnipeg to demonstrate the machine before selling one to Winnipeg. The man in the middle (with the mustache) is likely Winnipeg streets Commissioner Walter F. Tallman. 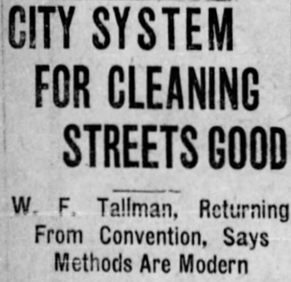 In August 1921, Winnipeg's streets commissioner W. F. Tallman attended a conference in Chicago on the topic of urban waste. He found that Winnipeg's system for street cleaning and garbage disposal was better than that of many North American cities. One weapon we did not have in our arsenal, though, were dry street sweepers, which were growing in popularity in larger U.S. cities.

Upon his return, Tallman pushed the city to acquire dustless sweepers for Winnipeg. He immediately got the support of public health officials and retail organizations representing industries such as butchers, dairies and bakers. The main reason for the support was not the desire to have pristine streets, but the eradication of flies attracted to the garbage and manure.

Flies have always been a health threat in urban areas. Feeding off of polluted water, dead animals and manure, they then come in contact with drinking water or food, spreading disease.

One of the most feared was typhoid, which was no stranger to Winnipeg. Numerous outbreaks in  Winnipeg's early years killed hundreds. The 1904-05 epidemic was the worst on record with nearly 3,000 cases and 271 deaths.

The street sweepers used by most North American systems at the time were "sprinkler" or "flusher" systems. They wet the ground in front of them before brushes scrubbed the roads. The result was that much of the dirt, especially from manure and food, was made into a paste on the surface that still attracted flies after it dried.

Dry sweepers, or vacuum sweepers, used no water. They swept the dust and dirt and used a vacuum system to collect the debris inside the vehicle where it could be discarded at a dump site.

Tallman got council members on-side not just because of public health issues, there was a cost savings as well as the current method of street cleaning involved a combination of "squeegee" machines and 21 men.

The drawback, though, was the capital outlay. Each unit cost around $15,000, (nearly $200k in today's money), and the city would need at least two or three to get started. 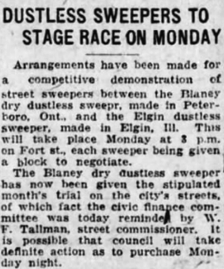 In the spring of 1923, council allowed Tallman to purchase one unit. Tallman favoured the Blaney system, which was based in Peterborough Ontario. Council, though, asked that he seek out other companies as well.

Blaney offered up a machine for a 30-day trial while their competitor, Elgin Street Cleaners of Elgin, Illinois, sent a machine up for demonstration purposes. In July 1923, there was a showdown of sorts on Fort Street to see which one performed best.

Newspapers didn't report which one won the contest but, presumably, it was Blaney's as he won the bid. An added plus for the Blaney bid was that during the 30-day trail the company guaranteed a maximum operating cost per hour and dutring the trial, the actual costs came in at 19 cents below that.

Council provided the money to buy one machine, with a likelihood of a couple more. After that, the issue of dry street sweepers disappears from the newspaper headlines. 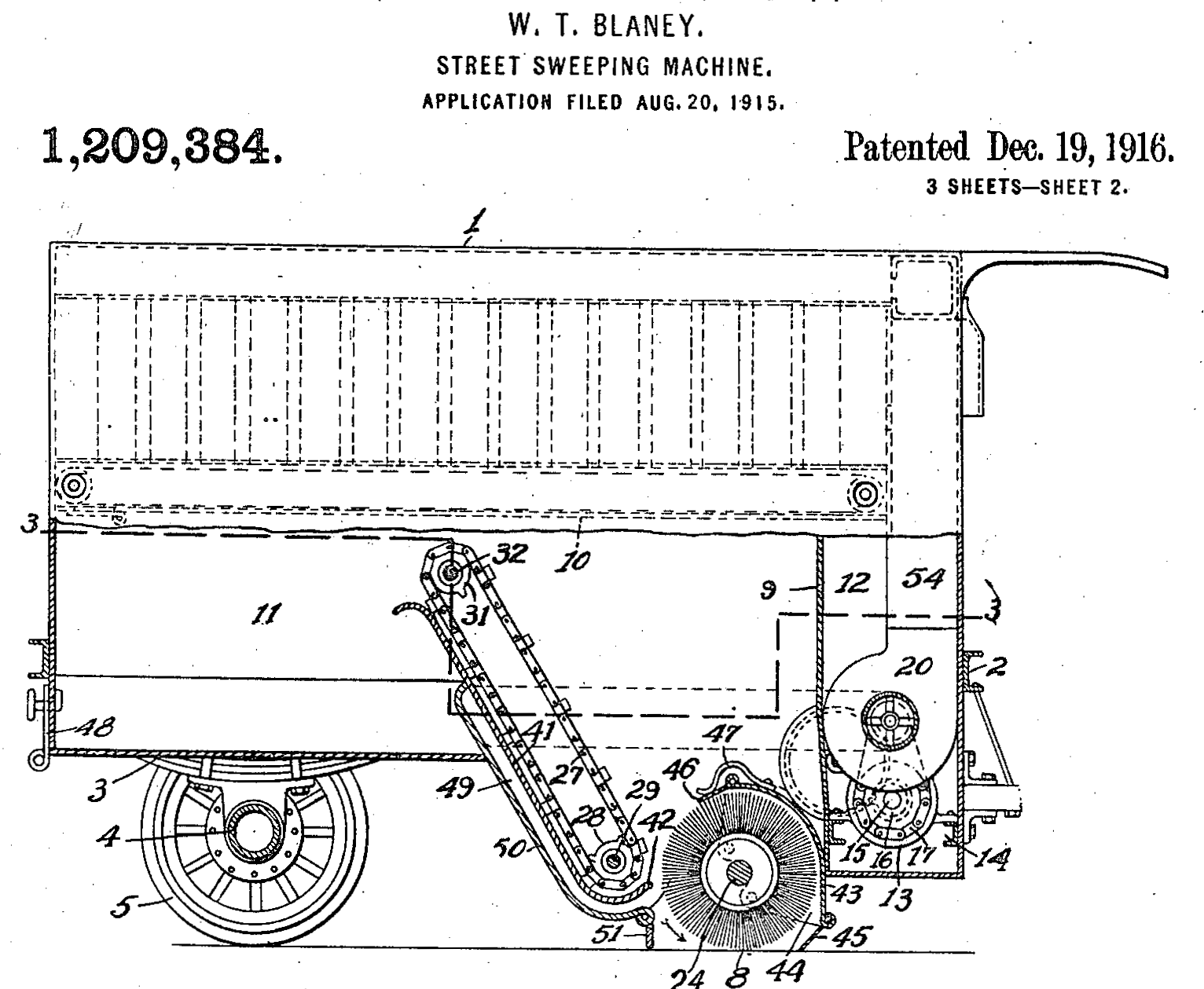 How successful was the Blaney machine ? Perhaps not so much.

In the spring of 1926, a Tribune article about the deployment of the sweeper, (there was still just the one at the time), notes that some on council had doubts about how effective the Blaney machine was. In 1927, when the city was considering the purchase of more units, the Blaney System (assuming it was still around) was not even mentioned.

More about William Thomas Blaney: Blaney was an engineer originally from Winnipeg, or at least lived in Winnipeg for a time. In June 1915, he became a partner in a newly created company called the Vacuum Street Cleaning Company Limited if Windsor Ontario, the other partners were from Detroit. The following month he filed his first patent for a street sweeping machine

In 1922 - 23 the partnership dissolved and Blaney, it appears, went out on his own. He took out other patents related to street sweeping machines in 1922 and 1930.

Aside from the odd mention in pre-1923 newspaper articles I can find no further mention of the man or any photos of his machine other than the Foote photo above and the patent drawing of 1915.

More about: Walter F. Tallman: Tallman was born in Beamsville, Ontario in 1855 and came to Winnipeg in 1882 to set up a branch of the family business: the Beamsville Brick and Tile Company. The venture failed but he returned in 1900 to manage brick factories for other companies.

He was a long-time member of the Manitoba Good Roads Association and a one-time president of the Manitoba Automobile Association. He often took extended road trips, such as in 1917 when he, Premier Norris and Mayor Davidson drove from Winnipeg to New Orleans via the newly opened Jefferson Highway.

His personal interest in roads and travel was credited with keeping Winnipeg at the forefront of street-related technology, whether it be new paving materials or innovative cleaning equipment.

Tallman had to resign his post in the summer of 1926 due to poor health. His post was then broken up and distributed to other city departments, including parks, engineering and public health. He died at his home in the Wolseley Apartments on January 2, 1927 at the age of 71.