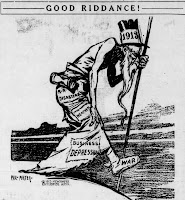 How the Winnipeg Tribune saw the end of 1913

Here are my 5 most-read posts of 2013, according to Google Analytics. Surprisingly, only 3 of my top 20 were written in 2013. The rest were earlier series on topics that made the news in 2013.

Thanks to all who checked out my blog. There's plenty more to come next year !

1. Safeway in Winnipeg - Back in 2010 I did a series on the history of Safeway in Winnipeg. When the U.S. grocery giant came to Canada in 1929, this was their home base. The company has been in the news a couple of times this thanks to their takeover by Sobeys.

2. Winnipeg Stadium's History - Despite the fact that it was ready to fall down around the ears of the football team at any second, the stadium managed to survive another year and reach the ripe old age of 59. The first post in this series, the 1953 construction and grand opening, continued to be a fan favourite.

3. Winnipeg's Sweetheart, Deanna Durbin - My 2011 series about her Winnipeg roots, which had never been written about before, drew fans from around the world. It was made popular again this year after Deanna died in France back in April.

5. Farewell McDiarmid Lumber - The troubled retailer was taken over by McMunn and Yates back in June. I wrote this history of the company that dated back to 1935.

Honourable Mention: The most popular series I did in 2013 involved Manitoba's deadliest train crashes, especially Brandon's 1916 crash in the heart of town that killed 16.