A sad centenary for the Royal Albert Hotel 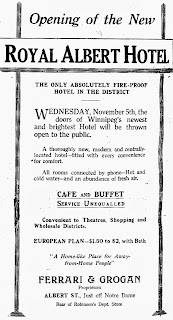 On Tuesday, November 5th the Royal Albert Hotel will celebrate its centenary. It will be a sad occasion given the recent events that led to its closure.

As the hotel proved in 1920 after it was shut down for operating as a bawdy house, it can bounce back given some TLC and a good manager. Lets hope that the Royal Albert has a few more decades left to come.

Earlier this year I wrote a detailed history of the building which can be found here.

As for the most-asked question I get about the hotel: "Arms" was added to its name in 1961 when the Gordon Hotels chain took it over and renovated it with a Tudor lodge motif. Its original name is the Royal Albert Hotel.