For more about the Carman Air Disaster, see my Winnipeg Free Press column of January 29, 2017 to commemorate the 65th anniversary.

On February  4, 1952, six people died in a pair of incidents known as the CBC - Carman Air Disaster.

Just before 11:30 am a C-45 Expeditor, (number 1478), took off from No. 2 Air Navigation School at what is now CFB Winnipeg. Though the war was over, Winnipeg was still major hub for training pilots and navigators for its NATO allies.

At the controls was 29-year-old Flight Officer Charles Chow-Leong, a decorated veteran or World War II with 6,000 flying hours under his belt. Also aboard were two RAF students from England, Acting Pilot Officer Peter Harvey and Acting Pilot Officer Edward Scanlan. They were stationed in Winnipeg for training from November 1951 to August 1952.

The CBC radio transmitter, located just outside Carman was erected 1948. At a height of 570 feet it was said to be the tallest man-made structure on the prairies at the time. This made it a perfect landmark for navigators.

During Chow-Leong's flight, weather conditions worsened. Winds picked up and a heavy fog rolled in. A couple of Carman area residents told the Free Press that the cloud level was as little as fifty feet above the ground at times.

At 11:55 am the Expeditor nearing Carman when it struck one of the tower's steel guy wires which sent the plane crashing into a field about 400 yards away. The crash was spotted by a passing motorist who notified employees inside the building. Though they rushed to the wreckage, there were no survivors.

The transmitter's engineer noticed the guy wire was severed and the top 80 foot section of the tower was leaning. Officials were concerned that if winds continued to increase it might cause the top to topple onto the building below.

Dominion Bridge of Winnipeg was contacted to send out some of their high-elevation workers to replace the guy wire, even if just as a temporary measure until a more detailed engineering report could be done.

A crew arrived around 5:30 pm to assess the damage and inform officials of the specialized equipment they needed to be brought to the site. By midnight, everything was in place and the top of the tower was visible thanks to a lift in the fog and some high-powered spotlights.

Walter Burtnyk, Jake Dyck and Ronald Erickson began climbing the access ladder that was built into the core of the tower structure. At 12:30 am they were still making their way up when loud creaks and snapping noises filled the air. The top section of the 85- ton tower began to collapse.

A couple of dozen bystanders on the ground below, made up of emergency officials, CBC employees and Dominion Bridge supervisors had to scramble behind and under vehicles to protect themselves from snapping guy wires and falling debris. Nobody on the ground was injured.

Rescuers scrambled to find the workers who had been situated at various heights inside the tower but there was no hope. Two were so badly crushed that their bodies were only positively identified at the coroner's inquest a couple of days later.

The province was stunned by the events which even made international news. The following day two inquests were called.

The coroner's inquest into the workers' deaths was held at the Carman Courthouse. On February 12, 1952 a jury ruled them to be "accidental."

A fifteen-man RCAF board of inquiry was set up to investigate the air crash. I could find no online record, in newspapers or elsewhere, as to its findings. 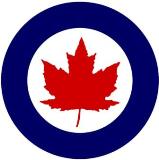 For all of the organizations involved in the disaster, February 1952 was not a good month.
In just the first week alone, the RCAF were investigating at least two other fatal accidents and a near miss:

- February 1st: A British Columbia-based student pilot died when his training flight from the Gimli air base crashed near Poplar Point;

- February 4th: Despite the death of three flyers, the Carman disaster could have been worse. Some eyewitnesses told the Free Press that minutes after Chow-Leong's plane hit the tower another RCAF plane passed by and narrowly missed striking another guy wire.

- February 5th:  Less than 24 hours after the Carman crash, an RCAF Mustang fighter ran into a small plane on the tarmac at Edmonton's municipal airport severely injuring the student pilot and killing the civilian pilot.

Samuel Campbell, who started at the Winnipeg plant in 1912 and worked his way up to Vice President and Manager of Western Operations for the firm, died on February 13th, 1952.

The CBC didn't have any physical casualties because of the disaster but it did knock the broadcaster off the air, (this was two years before CBC TV was launched in Manitoba.) All programming was cancelled until February 7th when a makeshift antennae was set up and they were back near full strength on February 11th.

That doesn't sound too bad until you consider the major story that they did not get to cover for at least 24 hours after it happened: the death of King George and proclamation of Princess Elizabeth as Queen Elizabeth II on February 6th.

A new tower was built in the summer of 1952. The CBW transmitter remained at Carman until 1992 when it was moved to Starbuck.


The men who died in the CBW / Carman Air Disaster 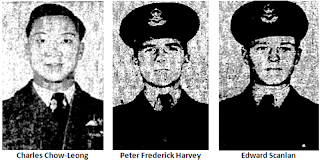 Flight Officer Charles Chow-Leong, RCAF, 29, is buried in his hometown of Lethbridge, Alberta. He left a wife and small daughter. (See below.)

Ronald Lewis Erickson, 19, was single and from Tyndall, Manitoba. He is buried in Tyndall Cemetery.

Walter Burtnyk, 28, lived at 930 Alfred Avenue and had thirteen years of experience as a steel erector with Dominion Bridge. He left behind a wife and son and is buried in Brookside Cemetery.

Jake Dyck, 23, lived at 508 Spence Street but grew up in Grunthal. His funeral was held in Steinbach.