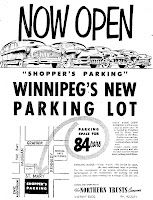 Three prominent downtown surface parking lots are celebrating significant anniversaries this year and I can't let that pass considering the strange affection that Winnipeg has for these places.

Back when the buildings were demolished the attitude was that the best place for an old building was in the ground, freeing up land for the next shiny, new development - an attitude that many people still hold today. After just a few decades the result was a downtown footprint made up mostly of surface parking lots, (check out this great illustration.)

Though there have been recent signs that two of the behemoth lots that take up most of a city block could soon be developed, (across from MPI and the Convention Centre),we still have a long way to go and continue to add new ones every year, (recent examples include Chinatown and Fort Street.)

In the meantime, I'd like to wish a happy birthday to these surface parking lots whose days don't seem to be numbered: Celebrating 45 years as a surface parking lot is the former site of the Dominion Bank at the south-west corner of Main Street and McDermot Avenue. (Street View.)

It was torn down in 1968*. (In the middle photo above you can see the Newmac Building / Whiskey Dix night club to the left of it.)

In recent years it was fenced in and a disco ball added, making it unique among downtown's surface parking lots.

* I have read a couple of different years for its demolition but the City of Winnipeg Historic Building Committee says it was 1968. Photo credits: top, middle, bottom. Also see here. Celebrating 35 years as a surface parking lot is the site of the former McIntyre Block. To me this is the saddest of lots as it sits just off the intersection of Portage and Main. (Street View.)

The building housed dozens of small offices ranging from accountants to dentists to Madam Red, a famous Winnipeg clairvoyant. The owners began demolition in late 1978 for "business reasons." They expected that an empty lot at such a prime location would attract big things and a big purchase price.

It was touted as a possible home for the new Hydro headquarters before the Portage Avenue site was chosen. Built in 1912 and horribly renovated, including the removal of its gargoyles in 1969, it lived on as an office building after the Trib shut down in 1980. In October / November 1983 it was demolished.

In the late 1980s it was touted briefly as the home of a new Lions seniors housing tower. Rumours sprung up last year that with the redevelopment of the old Canada Post Building into the new Public Safety Building, a new mixed-use development could be in store.

How fortunate we are to live in a place where convenient parking is available in such great abundance!

Madam Red (Helen Davis, as I recall) had relocated to the Union Bank Building (then known as the Royal Tower) by the time I was working there in 1983. She actually had a note saying something like "called away unexpectedly" on her door one day!

Oh man, that entertained the hell out of me! You worded that well. Thank you!

"But Winnipeg has the greatest... parking!" - quote from Maury Chaykin's character in 'Less Than Kind'.

Actually, when the Dominion Bank was demolished in 1966 (not 1968), its site may have served as a parking lot for a short time, but the vast majority of its years were spent as a "pocket park" with benches and trees and sculpture. When this arrangement ceased to be some years back, Whiskey Dix (then known as the Empire Club) obtained it to develop the beer garden/ party patio that's there today.