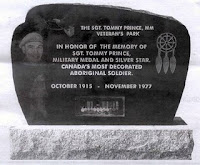 "A memorial to Canada's most decorated aboriginal soldier has been vandalized and robbed of replicas of the medals Sgt. Tommy Prince earned serving his country."

It was a terrible act of vandalism against one of Manitoba's best-known Veterans. It also happened on the eve before three of his grandchildren, one who lives out of town and had never seen it before, were to come together to view it.

In fact, the memorial was vandalized three times resulting in its removal for repairs. That is where the story ends. It currently sits at Eden Memorials awaiting shipment to Quebec to be resurfaced.

A recent Canstar Times interview with the man responsible for the monument says that the quote for repairs is around $3,000. Aside from the funds, he is also seeking someone to take over responsibility for the memorial.

Donations (for which you can get a tax receipt) can be made through: Sergeant Thomas George Prince M.M. was decorated eleven times in WWII and Korea, you can read more about his service record here and here. In 1955 he was celebrated in civilian life when he saved a man from drowning in the Red River at the Alexander Docks.

Prince spent the last years of his life destitute, living at the Salvation Army shelter until shortly before his death at Deer Lodge Hospital in 1977. We didn't do much for Prince while he was alive. The least we as a community can do to honour him is to ensure that this memorial repaired.

Does anyone know if the Johnny Cash song "Ira Hayes" has anything to do with Tommy Prince? I'll keep your memory alive Mr. Prince!