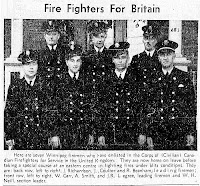 Keeping with my fire fighting theme, (see my post on Winnipeg's worst fires and Winnipeg's fallen firefighters), here's the story of a remarkable group of Winnipeg firefighters. They volunteered to go to England during World War II to fight fires and perform rescue duties immediately following the Blitz.

It's also the story of Jack Coull, who is believed to be the only Winnipeg firefighter to lose his life fighting a fire in another country.

The idea for a Canadian civilian firefighting force to assist Britain's beleaguered National Fire Service was first suggested in October 1940 by David S. Dunnett, a Winnipeg firefighter at the No. 3 Fire Hall on Maple Street. Dunnett presented his idea to Winnipeg Fire Chief Daniel Boulden, who gave him permission to take it directly to Premier John Bracken. The premier was so impressed, he is said to have called the minister of national defence about it while Dunnett was still in the room.

The idea seemed to go nowhere but O. L. Lister, chief of the Vancouver Fire Department, kept it alive at the national level. It didn't get official traction until Prime Minister King's 1941 trip to London that he declared that Canadian help was coming soon. An Order-in-Council was signed on March 3, 1942 to create the all-volunteer Corps of (Civilian) Canadian Firemen.

Active firefighters from across Canada were encouraged to sign up, though nobody was turned away. It's estimated that about 30% of the volunteers had no previous firefighting experience.

As they were civilians, members did not get regular forces pay. Instead, they received a stipend of $1.30 per day, ($17.50 in 2012 dollars), from the Government for their dangerous work. In 1944 the feds provided them the same protection as soldiers in that any firefighter returning from active service could claim their old job back.


The first man nominated to head the force was Winnipeg Fire Chief Daniel Boulden. He had been chief since 1928 and earned a reputation as an efficient, tough, sometimes heavy-handed leader - just what the military needed to pull the Corps together in a short amount of time. The body's national advisory body unanimously approved his nomination on October 18, 1941.

Boulden's appointment was a feather in the cap for the city of Winnipeg and freeing him up became part of the city's contribution to the war effort. The Tribune wrote that "Winnipeg can spare chief Bouldon because the need is greater over there than it is at home", (source).

It came as a surprise when Boulden suddenly resigned from the post on December 27, 1941. He had been found "not physically fit for service under overseas conditions" (Canadian Press, December 27, 1941.) Aside from carrying the wire story, no more details about the resignation or its causes were reported in the local media and days later he resumed his job as Winnipeg's fire chief.

Interestingly, the end of Boulden's civic career played out in a similar manner. Often clashing with council over fire department management issues, he found himself suspended and placed on sick leave on March 30, 1947 for an unnamed illness. Six months later he was dismissed by the city.

The next man chosen to head the corps also had Winnipeg connections.

Gordon E. Huff was a chief of the Brantford, Ontario fire department, though since enlisting in 1940 was a fire prevention officer in the RCAF's No.2 Training Command in Winnipeg. He and his wife lived at 42 Furby Street when his overseas appointment was announced.

These local connections may help explain why such a large number of Winnipeggers volunteered for service. In a May 24, 1944 Winnipeg Free Press article Column Officer D. Lang of the Corps congratulated the Winnipeg Fire Department for having the second largest contingent of any municipal fire department in Canada.

I could not find an exact number or a roster of the Winnipeg men but it numbered around 30. This list is pieced together from a couple of dozen Free Press and Tribune articles that mentioned the Corps. Those with * might not have been members of the WFD. 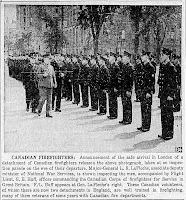 The men received some additional training in Ottawa but starting in May 1942 they began arriving in England.

The Corps of Canadian Firefighters fell under the umbrella of the British National Fire Service, though to avoid the operational difficulties of merging different training styles and having members of the same fire hall serving two different masters, the Canadians were kept together. They were broken into units of about 60 and took over six fire halls in Southampton, Portsmouth, Plymouth and Bristol.

At the opening of the Canadian headquarters in Plymouth the Duchess of Kent said ”...your patriotic spirit in coming here will not be forgotten by a grateful people” (source). The corps enjoyed some initial media attention but that changed once they were deployed. The exact size of the force and their locations were considered a secret so as not to tip German hands as to which centres had extra fire and rescue resources.

The Corps arrived after the period known as "The Blitz" was over, (it lasted from September 1940 to May 1941.) Air raids were still a regular occurance, though. In 1944 a new series of attacks began with a new weapon, V1 and V2 rockets, also known as "doodlebugs" or "buzz bombs".

On July 3, 1944 tragedy struck the Corps. The Germans hammered the London area with V-1 rockets. One strike killed 63 American servicemen and eight civilians in Chelsea. Another destroyed the Ashley Road Police Station. Another fell near Wimbledon killing two firemen and wounding two others -one of the dead was Winnipegger John Stewart "Jack" Coull.

Coull, 36, was born and raised in Lossiemouth, Scotland. In 1932 he began his career with the Winnipeg Fire Department. The following year he married Erna Torgeresen who had come to Canada just two years before from her native Norway. In 1938 they had a daughter named Joyce. In May 1942 Coull enlisted with the Corps while his wife and child stayed at the Muskoka Apartments, 110 Young Street.

Coull is buried in his birthplace at Lossiemouth Burial Ground. In 2003 a plaque was erected in London to "Fireman J.S. Coull (Winnipeg) who died as a result of enemy action when a V1 flying bomb fell on part of Wildcroft Manor, adjacent to this site on 3rd July 1944."

Another Winnipegger, Robert Legree, was injured. He was part of an extraordinary family. All of his siblings, three brothers and one sister, were in active service. One brother was killed in action.

Robert did recover and married Adelaide Skowski in 1949. He died in 1977 but his brief  obituary did not mention if he resumed his career as a fireman.

Through 1944 the bombing and rocket attacks of British cities tailed off and it was decided that the Canadians could come home. On November 4, 1944 a large group participated in a farewell ceremony that included a march past of Canada House on Trafalgar Square. Their mission was done.


In its two and a half years the Corps of Canadian Firefighters had 422 members representing all nine (at the time) provinces and over 170 municipalities. They suffered eleven casualties including the deaths of three men: Fireman J.S. Coull (Winnipeg); Section Leader A. Lapierre (Montreal) and Section Leader L.E. Woodhead (Saskatoon). Three others were seriously wounded.

In July of 1945 a special Canadian Fire Fighters Canada and Overseas war service badge was distributed to members of the Corps, (as civilians, they were not entitled to receive or wear military honours.)

There was something else that they were not entitled to: Veterans' benefits. One of the immediate annoyances was that they were charged income tax on the money they earned while fighting overseas, something members of the military did not have to pay. The package of benefits also included relocation credits, healthcare, disability and penion provisions.

The firefighters had a great deal of support in newspaper editorials from across the country and from organizations such as the Legion and ANAVETS. There was some initial action in Ottawa on a couple occasions in  1945 (also) and again in 1947 but nothing came of them. Deacdes later they were still seeking recognition as Veterans.

It wasn't until March 2000, eight years after the Merchant Navy, that they became entitled to these benefits.