A portrait of artist Victor Long 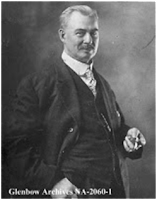 This year marks the 75th anniversary of the death of artist Victor Albert Long.

I first came across his name while researching the Carnegie portrait that hangs in the Millennium Library. He was one of Winnipeg's most prolific painters and said to be the first artists in town to earn a living solely from his work. In a career that spanned 50 years he left a body of work that included portraits of many of the West's first public officials.

Victor Arthur Long was born in 1866 in Fort Erie Ontario. Long’s interest in art took him briefly to New York and then a four-year stint in Europe, (Dublin, Munich and Paris.) A Vancouver newspaper later said that “He was there at the Beaux Arts and the Julien Schools under Cabanel, Jerome, and Tony Robert Fleury.” (source)

In 1887 Long returned to Canada and opened a studio on Main Street in Winnipeg. He specialized in oil portraits and would paint for anyone, regardless of status, and soon found that he was able to live on his income as an artist, one of the first in Winnipeg to do so.

At the 1894 industrial fair he took first and second prizes for his portraits of the late Archbishop Tache of St. Boniface and of Mrs. T.  C. Livingston. In 1897 he was commissioned by the city to paint the portrait of the Queen Victoria that hung in the main lobby of the new city hall: “The portrait as the city's contract called for, shows Her Majesty in the 55th year of her age, and not as she is at present” noted the Free Press of  July 29, 1897.

He also approached the city and province offering to paint large portraits of past mayors and speakers at a deeply discounted price in exchange for them being prominently displayed. 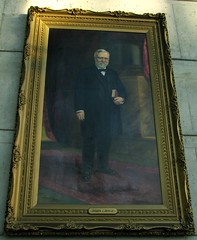 Andrew Carnegie at the Millennium Library

Long relied on a steady stream of publicity and the prominent placement of his work to keep his studio busy. Often he would paint a famous portrait and have it displayed in the window of a local shop. The newspapers would carry a line or two that "The Prime Minister is hanging in the window of so-and so’s hardware store..." to generate attention.

He sometimes ruffled feathers with an 'ambush' technique that he used to get his paintings sold.

In 1901, prior to a Royal visit, Long unveiled before city council an uncommissioned portrait of the King for presentation - providing that they pay him $300. Some councillors were not pleased but he got his money and even unveiled the work before the King himself that September.

A similar tactic was used in 1905 prior to the opening of the new Carnegie Library on William Avenue. He showed up at a council meeting with a larger-than-life portrait of Andrew Carnegie. Council was asked to pay $550 for the work that was meant to hang prominently in the library. It caused a heated debate but in the end council was shamed into buying the portrait.

In 1902 Long married Scottish-born Alexandria Victoria Hughes and they had two children, John and Winifred. In 1910 the family moved to the Vancouver area where he set up a studio and continued painting private commissions and public figures.

Each summer, Long took a train across the prairie. He advertised his stops in advance, set up in a local hotel and took new commissions that he brought back to Vancouver and later shipped the completed works to clients.

In November 1933, Long hosted a one-man exhibition in Vancouver that featured 40 of his works, including a number of his Winnipeg portraits.


"...a professional artist and proud of it. Artist Long was a true Winnipeg old-timer, one of the most likeable of men and that also probably went far in getting him portrait commissions....  Artists of that day, who were more ostentatiously aesthetic and less frankly professional, often rumbled in their throats because Vic Long inevitably landed all the important commissions in the portrait line."

Long's work can be seen in public buildings across the prairies. Some examples:

In Winnipeg the official portraits of a number of the first mayors of Winnipeg in the city council chambers. Fort Douglas and Fort Garry in the Local History Room at the Millennium Library.

At the Legislature George V and Queen Mary in the Speaker's Reception and most pre-1938 premiers.

In other provinces, he painted most early Alberta Lieutenants Governor, Premiers of B.C., chancellors of UBC and Prime Minister Charles Tupper's official portrait in the House of Commons.

Other Long portraits found in newspaper mentions but location unknown:

At a 1921 exhibition at the HBC store in Calgary he exhibited: Mr. Clove of Calgary. The Duchess of Devonshire. The Thinker. Father Lacombe.

As mentioned above, his largest exhibit was in Vancouver in 1933. It brought together 40 of his painting, including George V and Queen Mary, Father Lacombe and a number of portraits of famous Vancouver men.