Established in 1948 at Burnell and St. Matthews, Orioles is one of Winnipeg's oldest community centres. Its roots in the neighbourhood, however, date back much further. This is a look back at Orioles that I hope to update as the history project progresses ! February 9, 1952, Winnipeg Free Press
As a Community Centre, Orioles had offer a wide range of activities appealing to every age level. In 1950 activity committees for seniors, children and teens were created and a Women's Auxiliary was formed.

In the 1951 - 52 season the centre offered a wide range of activities. For children and youth there were handicraft classes, game days and dances. There was also an inter-club softball, basketball and volleyball teams. Regular pocket book and comic exchanges were held. Dancing lessons and skit clubs proved popular for all ages. There was a seniors drop-in and the Friday family movie night rounded out the schedule.

Barely a year into operation Orioles was turning people away from most events. It's no wonder. The small grounds and the clubhouse which measured just 26' x 62' had to serve a catchment area from Portage to Sargent Avenues between Sherbrook and Wall Streets - a total of 4,500 homes.

Fundraising for a new addition became a top priority. The centre's funds came mainly from a door-to-door canvass held every September but there were other sources of revenue as well, such as canteen sales and hall rentals. In November 1951 the club passed a motion that 10% of revenues from any source would be put into the building fund. 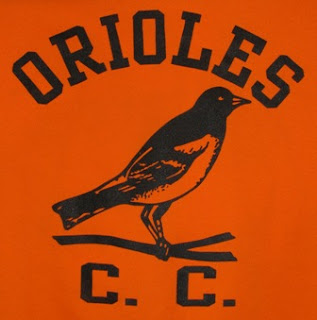 In September 1952 Orioles purchased a surplus RCAF "H-hut" located at the airport for $1. They spent $2,500 on an awkward move of the 54' x 25' structure down St. Matthews to the Orioles site, (something that the CAPT Museum in Brandon recently did.)

On November 16, 1952 the first work party was held to move the building adjacent to the existing one. The full project, which included adding a basement and plumbing to the new wing, was completed over the course of the year.

The first event held in the new space was a community talent show on November 22, 1952. It drew 200 community members. 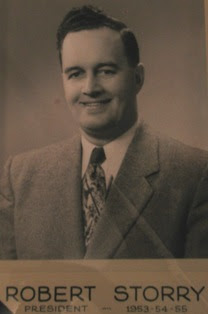 Rob Storry served as president from 1952- 53 to 1955 -56 and oversaw much of the rapid expansion in the centre's attendance and programming.

The West End's population was growing rapidly thanks to the baby boom. Other West End clubs were created or expanded. In 1954 Isaac Brock Community Centre was created, though its roots date back to around 1919 as the Issac Brock Community Club. In 1957 it underwent a major expansion and in 1959 the city announced a realignment of its catchment area that trimmed Orioles' western boundary from Wall Street to Dominion Street.

Officials from Isaac Brock complained to the parks board in 1960 that Orioles were targeting their territory during their annual fundraising canvass. Orioles argued that many of their supporters, including two of their five executive members, lived in the area and that people should have the choice of which centre they wanted to support. The fight lasted most of the year and, in the end, Orioles were told to cease canvassing the area.

A similar battle involving Orioles, Brock and Clifton arose in 1971 when the latter had its territory expanded. In 1964 there was another expansion which brought the building up to the sidewalk on Burnell Street. It was one of several World War II era clubs that got an infusion of cash from the city to upgrade their facilities.

The opening of the new space in November 1964 coincided with the centre's 15th anniversary. The celebrations featured a street parade and gala dinner at the Maryland Hotel.

Here are some of the Orioles activities that began in the 1950s:
WINTER CARNIVAL 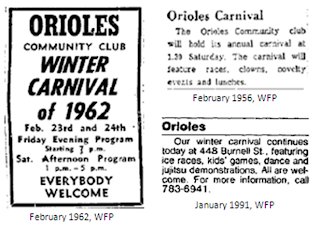 The Winter Carnival began in 1951 and was a West End fixture through to the early 1990s. Held in February, it featured displays from all of Orioles' clubs, from figure skating to dance recitals. Hockey (and later broom ball and ringette) tournaments were held in conjunction with the carnival. Evening entertainment included dances. The carnival was also a time to choose Miss Orioles. Above is 1950 Miss Orioles Marjorie Blake who went on to become Miss Winnipeg that year. (For a list of Orioles Queens see the lists section.) Activities varied from week to week. There were game days that included checkers, chess and whist. Sometimes it was handicrafts or music and dance lessons. Often, performers were brought in to give a recital or lead in a sing-song. The afternoon always ended with a hot lunch. 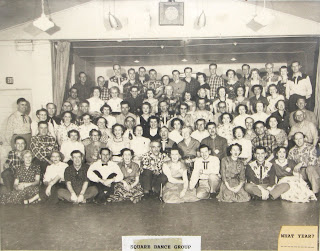 A popular activity for all ages that began in 1951 were dance classes. For the older crowd, square dancing was the rage. What began as a single class offered in 1951 grew to five classes and 200 participants in 1953. Its popularity continued through the 1960s. For the younger children, tap and jazz dance classes were offered. Orioles performed at city and provincial dance recitals into the early 1990s.
MUSICAL BAND AND MAJORETTES In the mid 1950s came the music program. By 1958 Orioles boasted a 70 piece marching band that performed around the city and went as far afield as North Dakota. By the 1970s the band program consisted of a drum and bugle corps. Around the same time, Majorettes (baton twirling) was also introduced. Through the 1960s to early 1980s Orioles was a major hub for baton twirling in Winnipeg, putting on annual camps that attracted national-level twirlers.

Like the band, the Majorettes regularly performed in the city and beyond. The two were often paired up. Above is the Majorettes and Drum Corps group that went off to St. Paul, Minnesota in 1974 and captured 5th place.

Though hockey was still king, Orioles branched out into a wide variety of sports. In 1955 they entered 22 teams into city leagues for hockey, basketball, lacrosse, volleyball, baseball and softball.

In the late 1950s to the mid 1960s teams become harder to track as some community club senior teams appear to have become arms-length and go under a sponsor name rather than Orioles. 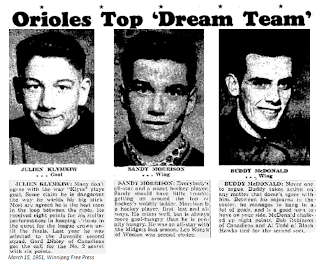 Of course hockey continued to be a big draw for the club but with an increasing number of community clubs it was tougher to create a dynasty.

In 1950 - 51 Orioles entered 5 teams into city hockey leagues: Tom Thumb, Bantam A, Bantam B Midget and Juvenile. The best of the bunch was the Juvenile team who lost out the provincial championship, beaten by the Winnipeg Monarchs. The team, however, dominated the league and the Free Press' All-Star team named at the end of the season. Sandy Morrison was named the Winnipeg Juvenile Hockey League's MVP. The Juveniles came runner-up the next season as well and despite finishing top of the league for most of the 1950s, it appears that the coveted Juvenile title did not return to Orioles until 1965 - 66 and again in 1968 - 69.

From 1955 - 1964 Orioles won five Junior baseball championships, thanks in part to their all-star pitcher Robert Hunter. 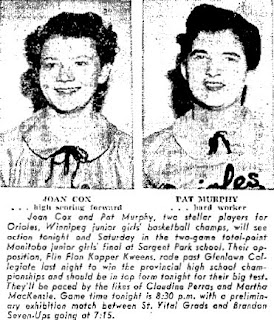 April 15, 1955, Winnipeg Free Press
In 1955 the team was tops in the league again. Irene Morris, Joan Cox and Pat Murphy made the Free Press' "Dream team" lineup. They won the title three more times that decade.

Feb 6 1953, Winnipeg Free Press
In 1953 the city's library department recommended a travelling "bookmobile" to serve under serviced areas of the city. The huge post-war growth of the West End made it guaranteed stop should such a service be introduced.

Orioles Community Club, through the Women's Auxiliary, were vocal supporters of the bookmobile and appeared as a delegation before city committees at every step of the way. The Bookmobile plan was approved and Orioles became one of the stops for Bookmobile Number 1.

In the early 1960s the stop was moved to Ellice and Arlington where in 1966 a West End library branch was built.

I notice that there is no mention of the Friday night movies that were shown at the club in the early 50's. These were typically serial thrillers that had us hooked to come back the following week to find out what happened to the hero. I think that admission was a dime.

We lived on Banning st from about 1961 up until july 1964.I spent summers in the wading pool or playing in the park.In winter i often laced up the skates to skate on the outdoor rink.Took in the winter carnivals and other festivities.My last visit there was a wedding reception back in 1984.Have great memories of the community club and the park.
Les Welsh
Craven,Saskatchewan.

I played Hockey on the Bantam B team Back in I think was 1968 ,Our Coach was Mr.Love who lived on Banning. If memory serves me right we won City Championship And Had the U.S. Bantam Olympic team come to Orioles Community Cemter come here to play us and we beat them then we went down To North Dakota and played them again at the University's Arena Via Grey Goose Bus Lines and again we beat them . Orioles was also the first place where I was crosschecked and took a stick across my jaw where they thought that my jaw was broken ( but it wasn't ) . Back in those days to play indoors in a Arena was pleasure as All our games were played outdoors no matter what the weather or Temperature was outside. We cleaned the ice ourselves between periods and to keep our feet warm some ( myself included ) used Powdered Mustard in our skates to keep our feet warm ( Our mothers were not impressed when they saw our socks afterwards ).