It turns out that December 2011 is a milestone for more than one Winnipeg entertainment icon. On December 24, 2011, the Uptown Theatre, now Academy Bowling Lanes, will celebrate 80 years !

Here is a look back at what was one of Winnipeg's most unique theatres ! 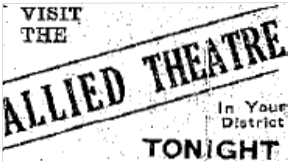 Uptown's sisters: the Palace on Selkirk Avenue; the Rose on Sargent Avenue and the Roxy on Henderson Highway.

Allied Amusements Ltd. was created in 1912 by Jack Miles to run a single theatre, The Palace on Selkirk Avenue. By the end of the 1920s it had grown into a chain of four with the addition of The Roxy (on Henderson), The Rose (on Sargent), and The Plaza (on Marion at Tache).

The company's fifth theatre on Academy Road would be their most unique and most controversial. 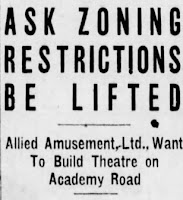 Allied had acquired three lots on Academy Road to build a new, $50,000 theatre for River Heights. Late in the planning stages they managed to purchase a fourth lot on Ash Street.

The company went before city council in May 1930 to ask for a zoning change to allow them to incorporate the additional residential lot into their plans so that they could create the "largest and finest neighbourhood theatre" in Canada. They vowed the cost of the new building would triple that of their original permit.

The application was controversial and opposed by residents who feared noise and parking issues. 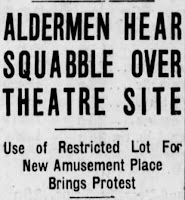 After a few months with no decision from the city, the company pushed the issue in August 1930 by clearing all four lots and doing the preparation work for a foundation. The safety committee warned them not to build anything that came above ground level until a decision was made.

The zoning committee finally heard the application on August 28, 1930, t. A Tribune reporter anticipated that it would be "something of a field day."

Both the company and residents presented their cases. Rather than imposing a ruling, however, the committee sent everyone away with the instruction to try to work things out themselves and come back at a later date.

By December, there was a breakthrough. The company agreed to a shallower footprint on the Ash Street lot and to provide a parking lot at the south-east corner or Academy Road and Waterloo Street. In return, a "reasonable majority" of residents signed a petition in favour of the new building.

In January 1931, Allied Amusements took out at additional $76,000 building permit for the larger structure which brought the total permit value to $136,000. (The final cost, including furnishings, was estimated to be about $175,000.) It was now up to architect M. Z. Blankstein, who had worked on a number of city theatres, to deliver something unique.

The exterior was designed to resemble a Mediterranean villa with wrought iron balconies, a colourful stucco finish and a red tile roof. The roof line was that of an Islamic mosque.

The exotic exterior was brought inside as patrons were meant to feel as if they were seated outdoors in the square of a Moorish village. The walls of the theatre hall included reliefs of village buildings overlooking the 'square'.

The ceiling was painted blue with twinkling stars inserted into the plaster. Images of moving clouds were projected onto it to add to the outdoor feel.

Lighting came from 16 spotlights placed around the periphery of the hall rather than chandeliers so as not to ruin the outdoor effect.

(For a more detailed description of the building’s interior see the City of Winnipeg Historic Building’s Report.)

Though it was meant to feel open air the patrons inside were certainly not roughing it.

The seats - 1,200 on the main floor and just over 400 on the balcony - were mohair–backed with leather bottoms stuffed with horsehair for a feeling of luxury. The front row of the balcony and the loges had 'chesterfield style' seating.

Safety, of course, was a key selling feature of any theatre of the day.

The Uptown had a state-of-the-art ventilation system and boasted a wood-free hall, (brick with metal lath was used instead). They were also the ‘first in the Dominion’ to use an Orthokrome screen “…said to adhere all the red light rays reputed to be harmful to the eyes”. (Winnipeg Free Press, December 24, 1931). 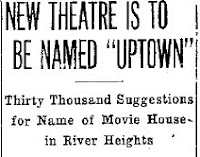 Allied held an essay contest to name the theatre.  The winner would receive a Northern Electric radio and have their essay published in the daily paper.

Some 30,000 entries were submitted, (this was the depression after all!) and the management chose their favourite: The Uptown. It turned out that there were 39 essays that suggested Uptown, so no one winning entry was singled out. (I'm not sure if this meant that 39 radios were provided, though the Free Press did print a series of the essays).

On October 5, 1931, the winning name was announced on the stage of the Roxy Theatre on Henderson Highway. 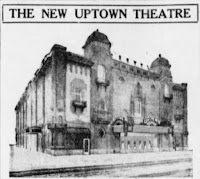 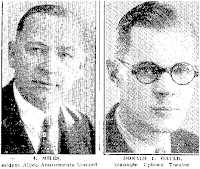 
Mayor Webb presided over the opening ceremony on Christmas Eve 1931 that included Mr. J. Miles, president of the theatre chain, and Donald Gauld, former manager of the Roxy and the Uptown's first manager.

It does not appear that architect Blankstein was present. He died just one week after the opening.

The ceremony was followed by a newsreel, a movie short and the feature movie The Brat starring Sally O’Neill and Frank Albertson.

The theatre was built as a movie house with a small stage area that was too shallow for most types of of live events. These were hard times and the Uptown had to fill as many seats as possible. Small stage performances, including lectures, recitals, and fundraising concerts became a regular part of the schedule.

The Uptown mainly showed the second-run of top films usually in a double bill. An exception to this came in the early 1940s with 'Sneak Peak Thursdays' in partnership with Famous Players Theatres. Dozens of first-run films premiered here before they opened downtown the following night.

Saturday afternoons remained a mix of Westerns and cartoons.

The rising popularity of television meant the end of most neighbourhood theatres. A number of chains faltered and their theatres were sold off for demolition or to be converted to other uses.

The Roxy and Uptown, now part of the Western Theatre chain which was co-owned by J. Miles, hung on longer than most. In 1960 it was announced that both would be converted into into bowling alleys.

On Sunday, May 15, 1960 the Uptown held a farewell afternoon with a free feature and six cartoons.

The official ceremony took place October 21, 1960 with 'Cactus' Jack Wells as emcee and a fashion show of the latest bowling attire.

In 1982, Brian Britton leased the bowling alley from Allied, which by then known as Miles Enterprises.

One year later, history repeated itself when Miles Enterprises tried to redevelop the parking lot at Academy and Waterloo into a strip mall. Long-time residents pointed to the 1931 agreement that the parking lot be built as a condition for rezoning the land for the theatre.

David Miles argued that the parking requirements for the old 1,500-plus seat theatre and the bowling alley were not comparable. The city noted that a 1944 rezoning change to the property had cancelled the need for the parking lot to be in place.

The strip mall was built. 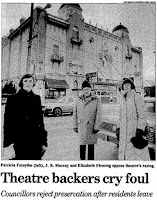 In 1985, Miles Enterprises applied to the city to demolish the Academy Lanes building arguing that its heritage designation was the same as "expropriation without compensation." David Miles claimed that the building was economically marginal at best and that the only option was to demolish the existing building for a modern commercial strip mall.

The move met opposition from some residents and heritage advocates.

It was a back and forth fight that saw the city uphold, then remove, then uphold again, the building's heritage status. In the end, Miles was permitted to add a small, two storey addition to the side of the building.

In June 2017 it was announced that a new lease agreement could not be reached with the building's owners and that it will close on July 18th, 2017. 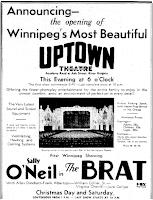 A lot of Winnipeg is about to celebrate its 100th birthday!

Yes, it will be hard to keep up in the months ahead. Selkirk Settlers hit the 200 year mark next year !

I'm confused. If the theatre opened in 1931, isn't it celebrating its 80th anniversary?

Imagine trying to open a 1600 seat theatre on Academy road these days!

The neighbourhood cried blue murder over Pizzeria Gusto's 20 seat patio. Any idea how 1600 people would get to the Uptown? Seems way too many for transit and parking would have been similar to what it is today.

Back then I guess they were very much a community cinema. 1600 seats but 75% of the traffic would be walk up !