A distinctive feature of Winnipeg's old terminal was the public art. There were six major pieces commissioned for the building, though only two remain and their futures are uncertain.

I contacted the WAA for more information about the works and what might happen to them but they did not contact me back. In Public Art in Canada, Flaman quotes an email he received from a federal official that: “At the time of transfer (to local airport authorities) all artwork at the airport is loaned to the airport authority from Her Majesty. Her Majesty owns all of the artwork before and after the transfer.”

In the early 1960s (a decade prior to Canada's Art Bank) the feds were toying with a federal public art policy and deemed that one half of one per cent of the construction cost of new buildings be allocated to public art.

The first large-scale test for the policy were the three new airports being built in Winnipeg, Edmonton and Toronto. In our case, the first to these airports to open, this translated into a budget of $55,000, (about $409,000 in 2011 dollars.)

In March 1963 (only a few months before the airport was to open, some artists noted) three airport art selection committees were appointed by the Federal Government. The panels were national in scope, as the public art program was to be. (* See below for the makeup of the Winnipeg committee.)

There were a few criteria set out by the committees: the art had to be abstract (no 'calendar art' allowed); most of the works had to be by a Canadian artist from a province other than the one the airport was located in; and the artist had to be outside the 'mainstream' of the Canadian art world.

In all, six works were commissioned for the Winnipeg airport. Here is a list and an attempt to figure out what happened to them. I start with the two works still located at the airport. Bernard Flaman in Public Art in Canada describes the work as a "…structurist composition of mosaic tile, coloured plexi-glass and vertical aluminum bars still catches the late afternoon sunlight (especially in autumn) and glows with yet another interpretation of prairie light and colour. Perhaps the pretties of all the pieces, the combination of pastel and primary colours evokes memories from the early 1060s of distinct fashion styles and product design."

Graham became an associate dean of architecture at the U of M and in the 1970s was appointed head of a committee that advised the provincial government on art for their buildings.

It appeared that the mural might not find a new home after the terminal closed in 2011 but a deal was reached with Ottawa's Canada Aviation and Space Museum that will see it go on permanent display. Bernard Flaman in Winnipeg Modern says of the work: "The inspiration came from nature, interpreted as a cool, pristine and controlled composition of coloured enamel metal cubes arranged on a series of white “fields" … the cubes seem to physically stretch out into the space creating a dynamic terrain.”

In 2007 the artist complained about t the way it was being displayed. In 2010 the U of M began negotiating for the work after the terminal was closed. They were successful in 2011. 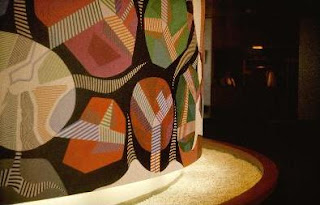 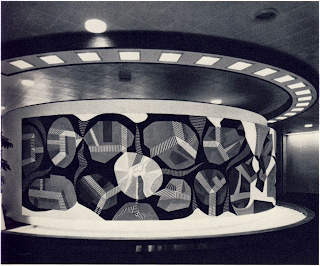 This oil on canvas mural, representing an aerial view of the prairies, was mounted on a curved screen located at entrance to the Horizon Room, the airport's original restaurant and lounge. It was removed (date unknown), flattened, and installed on the wall at Mirabel airport. When that airport closed it was set up at Trudeau.

Gilles Hanault, La Presse's art critic, wrote back in the day: "It could be viewed as the artist’s interpretation of Western Canada’s rich and original landscape but essentially it is more than that, the mural is the embodiment of Pellan’s lifelong experience with colours and form, and it is one of the best works of the internationally recognized painter … The spirit of the prairies is powerfully expressed and dramatized here." 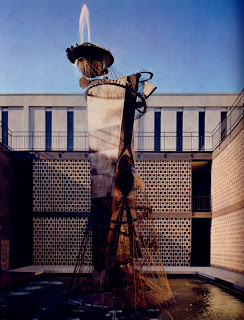 Gladstone used one ton of bronze sheets, rods and 3000 rivets - materials used in the construction of airplanes - to create this fountain that was situated in a main floor courtyard. He said his work was influenced by his interest in science and noted: "This type of art is a definite statement of our time and we will be judged in the future by it" (Free Press August 17, 1963).

The artist was 34 at the time of the work and went on to have an illustrious career. His works can be found in the Art Gallery of Ontario to the grounds of the Mayo Clinic.

This sculpture was located in the same courtyard as the Solar Cone, mounted to the wall above it. Made of Monel metal, it was created in three pieces in the artist's Toronto studio and shipped to Winnipeg for assembly. Yarwood said his work was "...a totem interpretation of the courtyard itself — a negative."

He later created the inukshuk statue, part of the memorial to Vilhjálmur Stefánsson near Arnes, Manitoba. 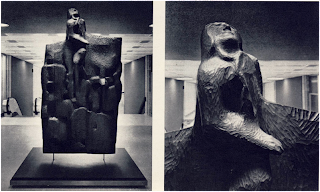 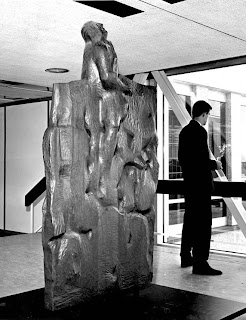 Gunda Lambton wrote of the work that it "… expresses the idea of flying. From a mass of rock and indistinct shapes of birds – which could fly before earthbound man – a single figure emerges, looking upward. The movement of the bulky mass seems to accelerate toward the summit.”

This piece of mahogany was supposed to be the centrepiece of the art works but found itself on the pedestrian walkway between the terminal and administrative building. According to Lambton, this was a temporary spot but due to the representation of the local flying legend little effort was made to find a more prominent location. 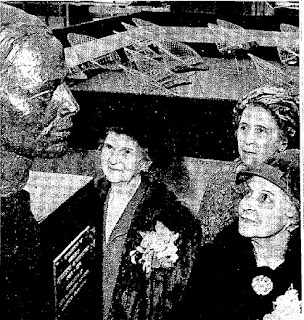 Flaman notes that when the work arrived, officials had a traditional bust made of Stevenson. It was that representation that his three sisters unveiled at the official opening. 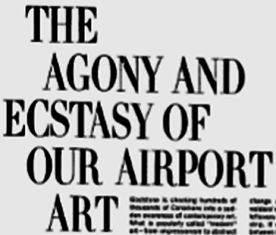 As expected, the results of the program were controversial. The works were referred to as everything from blobs to metal scrap heaps.

The Montreal Gazette wrote in 1964 that the national airport public art program, (in which the feds had invested $450k by the end of 1964), was "... shocking hundreds of thousands of Canadians into an awareness of contemporary art."

David Crane, a planning administrator for the Boston Redevelopment Authority in Winnipeg for an international design conference, said that the works were typical of a formal arts policy and "...forced out of a tube like toothpaste....Somebody decided there shall be art and so somebody goes out and makes art." (Winnipeg Free Press, January 23, 1964.).

Looking back, Flaman writes: “Unfortunately the nationalistic goals and abstract nature of the artworks were perhaps too far in advance of public taste and understanding.”

Well done! Sad to hear that Northern Lights could be 'demolished'.

I may or may not have gone to the airport the week before it closed just to say my goodbyes to those two beautiful works of art. It really won't be the same going on a trip without getting to see them.

@Girl - I thought the Pellan piece was right up your alley ! Too bad that's not still around.

@ Andrew - It is sad. U of M is trying to get the Bornstein work but apparently are not interested in Lights which is actually by one of their former profs / deans.

I appreciate this nice post about the airport. People would like this airport and its great services including airport parking facility for the passengers.
short stay parking gatwick