Looking back at Winnipeg's Airports (Part 2) The appointment of Green Blankstein Russel (Green Blankstein) as the airport's architects ensured that a modern design would be a key element of the project. The firm was gaining a national reputation as being on the leading-edge of Canadian modernist architecture. Other Winnipeg projects to that point included the Elizabeth Dafoe Library, Norquay Building and the Civic Centre. Later work included the Concert Hall, Manitoba Museum, Shaarey Zedek Synagogue and the Great West Life complex. (Click the above links for a longer list).

Airports were something new for the firm so chief designers David Thordarson and Bernard Brown spent a great deal of time traveling to the new jet-age airports that had recently opened in the United States to find what worked and what didn't. 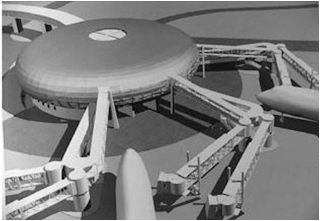 It was initially thought that the "aeroquay" or hub and spoke design favoured by American airports was the way to go. After the initial drawings were done, they opted instead for the more easily expandable horizontal design. (It's not clear if that change was completely the firm's decision or brought about by Transport Canada).

Transport Canada had the designs through most of 1958 and 1959 but wanted to tinker with them to save costs. In the 1959 budget, Ottawa announced $63 m in airport development funding which included new airports for Edmonton, Toronto and $3 m to get the Winnipeg project started. 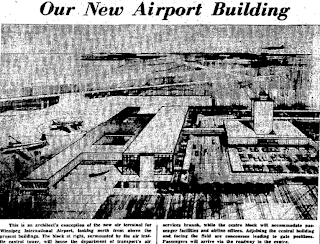 February 1, 1960, Winnipeg Free Press
In late January 1960, Transport Minister Gordon Hees and departmental officials flew to Winnipeg to meet with the Winnipeg - St. James Airport Commission to unveil the final plans. The project, estimated to cost $8.5m, included a terminal, administration building with tower, parking for 750 cars, a power plant and the necessary sewer and water infrastructure. The completion date was set as sometime in 1964. 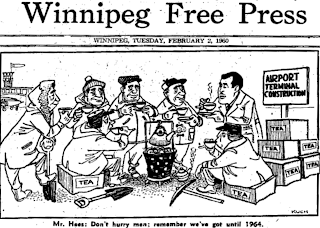 Some expressed frustration with the four year wait as the current airport was bursting at the seams. Business and political leaders felt that further delay could hurt Winnipeg's economy as other centres could offer better facilities for passengers and cargo. Hees assured them that this was the standard amount to build such a facility and that there were no built-in delays to spread the costs over additional budget years.

Excavation began in Spring 1960 and construction on the terminal began in August. The contractor was Commonwealth Construction Co. of Winnipeg who had submitted the lowest bid. Along with a new Winnipeg airport, money was also provided for the construction of a satellite airport, something international airports needed at the time. The site chosen was north of the city, now the St. Andrews airport. It would open in late 1963.

November 9, 1963, Winnipeg Free Press
Construction ended a little ahead of schedule. In September airport manager Jack Smyth and his staff moved into the new building and other administrative staff trickled in after that. They prepared for a November 1963 opening.

If construction was ahead of schedule, the budget was out of sorts. I could not find a story about the costs but articles around opening day refer to it as "an $18 m airport" -up from the $8.5 m - $10 m quoted at the beginning of construction.

The first was the final flight out of the old airport. At 9:30 am a Trans-Canada Airlines Viscount departed with 30 members of the media, transportation officials and other dignitaries. It was piloted by Rene Giguere who was the first pilot hired by TCA 26 years earlier. After a quick tour over the city the Viscount landed at the new terminal.

Opening Ceremony, January 1964 (source)
The opening ceremonies took place on Friday, January 17, 1964 in front of an audience of about 1,200 people. There were the usual speeches from dignitaries ranging from Transport Canada officials, the Lieutenant Governor and the Mayors of Winnipeg and St. James.

The most poignant moment was when a new bust of Captain Stevenson was unveiled by his three sisters. The event was followed by a weekend-long open house and guided tours. 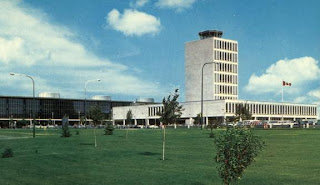 The new travelers saw an airport of modern, sharp lines - the opposite of the curved, streamlined planes that they would be flying on. The administration building featured Manitoba Tyndall stone which gleamed white against the backdrop of the dark terminal. That facade of the terminal was a 58,000 square foot glass wall. A protective coating gave it an almost black appearance. 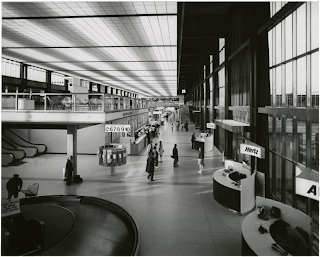 The interior featured the same sleek lines as outside. It included a 'floating' mezzanine level with seating for 400 waiting passengers. Directly underneath it was a 200 foot long, continuous counter. 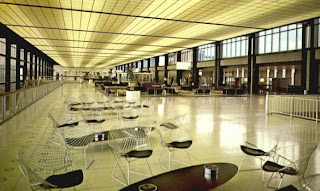 Looking up, there was 35,000 square foot illuminated ceiling which required 8,000 fluorescent bulbs to light. (There's a catwalk above the ceiling that allows access to the bulbs). The 125 foot tall tower boasted $700,000 worth of the latest radar technology, a new purchase by Transport Canada for Canada's large airports made just months before the Winnipeg tower was to open.

One fan of the new airport was Sir Basil Spence who called it "a fine building." U of M architecture prof Theodore Matoff disagreed and wrote in the Winnipeg Tribune that the long, black glass wall shut the prairie out of the building.

For amenities, there was a restaurant, cocktail lounge, nursery, barbershop, TD bank, post office outlet, gift shop and a book shop. Lounges featured television chairs for passengers wanting to catch up on the news or their favourite television shows while waiting for a flight.

To give a sense of how far air travel has devolved in some ways, the airport featured five double and five single "roomettes" for transient passengers or those stuck on long layovers. These small rooms were a place to grab a snooze, quick shower or put the kids down for a nap while waiting for your flight. They lasted until at least late 1967. 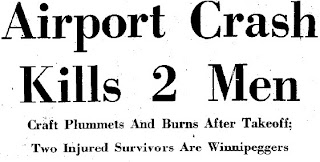 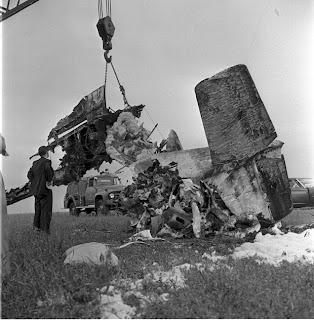 The airport still enjoyed a good safety record but the first people killed in at the facility happened months after the official opening. Two American passengers of a twin engine plane died when it flipped just meters after leaving the runway. Changes to the airport began shortly after opening.

In 1967, $500k was spent to add new escalators. The airport was built at the tail-end of the era when passengers boarded directly from the tarmac. Ottawa didn't install escalators at the apron end of the building and airlines didn't purchase the new 'people movers' to pick up passengers at the door of the plane and move them to the second level of the terminal. As a result, passengers had to walk a tall flight of stairs after disembarking.

The following year permanent bridges were also added to the rear.

The courtyards and original observation deck that acted to bring in more natural light and display public art were eventually filled in to create more office space. Added security requirements further cut off the front of the building from the rear.

The building underwent a multi-million dollar renovation in 1984.

Here is a list of some of the contractors that worked on the 1964 terminal. (Images taken from a couple of January 1964 Winnipeg Free Press editions.) 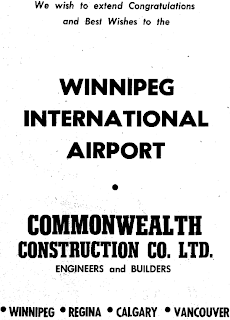 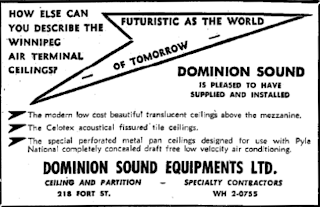 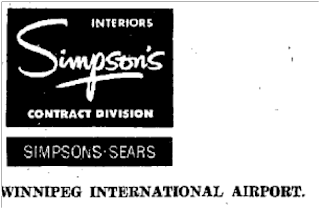 Next: The groovy public art !

This is my first time i visit here and I found so many interesting stuff in your blog especially it's discussion, thank you. taxi

Airport is designed wonderfully and I am sure there would be wide area for airport car parking where passengers would be able to park their vehicles.
airport parking deals

We can see the big improvements of airports from these photos. Clearly modern technologies and materials made a big difference in building and construction industry.
3M Scotch-Weld Rubber and Gasket Adhesive EC-1300L

Hey, this day is too much good for me, since this time I am reading this enormous informative article here at my home. Thanks a lot for massive hard work. Murcia Airport