September 1 marks the end of summer for some. It also marks a particularly dark day in Manitoba history. 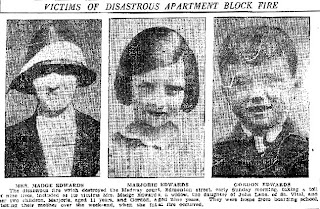 In 1929 what may be Winnipeg's worst fire in terms of loss of life took place at the Medway Court Apartments on Ellice Avenue. Every on-duty fireman and piece of fire fighting equipment in the city were on scene but in the end nine died and another nine were taken to hospital.

You can read the full story of the Medway Court fire here.

In 1947 Canada's third worst train disaster, the Dugald Train Disaster. Thirty one people died in a crash so fiery that most victims were buried in a mass grave in Brookside cemetery.

For more on the disaster see today's This Day in Manitoba History.