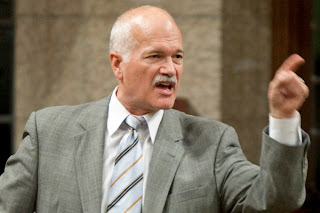 Like most Canadians I was saddened to hear of the death of Jack Layton.

It took me some time to warm to him but election after election i got to 'know' him better and liked the man and the politician. Given that he returned after each election with a larger caucus, obviously Canadians felt the same.

Jack's last couple of years also had a personal connection for me as his condition mirrored my fathers. Not long before Jack was diagnosed with his first bout of cancer, so was my father. He, too, beat the disease only to have it come back soon after and kill him. 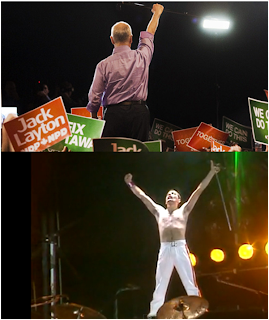 In my 2011 campaign wrap-up post I gave a kudos to Jack. Some openly questioned whether he had a campaign fight in him, as if being a cancer survivor and walking with a cane meant that he had to hang up his goals and sit in a care home somewhere.

Instead, he wielded that cane a la Freddy Mercury's mic stand and pulled off an unprecedented victory for his party. To boot, he was the only oppo party leader to even make it back into the House with a seat !

Sadly, when his cancer returned Jack had no more victories in him. Canada is a poorer place today.

My condolences to his family, friends and colleagues.