Motorists, pedestians beware: Back to the 1940s. 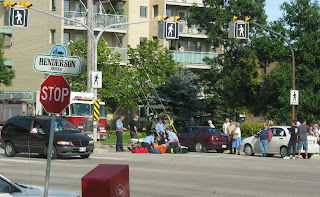 It was a nasty holiday season for vehicle-pedestrian collisions (including here, here, here, here) leaving three dead in the city and nine throughout the province. The police traffic unit was exhausted from the carnage.

In related news from December, the new Winnipeg Police Cadets will have the power to enforce jaywalking laws and the Free Press ended off the year with an editorial about the dangers of both poor planning and jaywalking: "And while Montreal may hold the title, Winnipeg must be a close second when it comes to jaywalking, even across eight lanes of speeding traffic. Nor is it unusual to witness pedestrians stepping into a crosswalk without checking to ensure it's safe". Could 'jaywalking' become a hot-button issue for the 2010s? Decades ago it was front page news.

Particular attention was paid to the problem in the late 1930s. Shaking off the economic ravages of the Depression, the personal motor vehicle began to make real inroads (no pun intended) and cities experienced growing pains as the two tried to co-exist.

A 1939 U.S. study said that two-thirds of pedestrians struck were breaking some sort of traffic law at the time. A Winnipeg Tribune July 1939 editorial concluded that this showed "...a strange quirk in human nature. Motorists generally are coming to accept the traffic regulations as inevitable but pedestrians still want to be free." Action was needed. 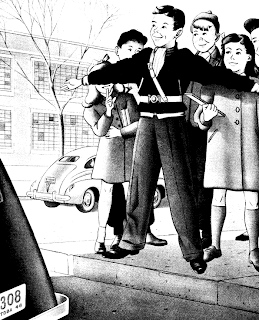 In 1936 an informal school safety patrol system was created at Greenway School to combat the large number of industrial trucks traveling in and out of the Burnell industrial area, which included the Greyhound garage, scrapyards, a lumberyard and the Canada Bread plant. The program got noticed and within a few years became the formalized School Safety Patrol program we know today. 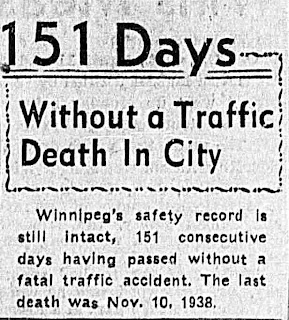 A front page count-up in the Trib.

Road safety awareness, usually aimed at pedestrians, became front and centre. The Trib posted the number of accident-free days on their front page. Regular 'safety grams' were published with the comics section. The campaign did seem to have an impact, initially. Winnipeg got North American attention for going a record 228 days without a vehicle-pedestrian accident in 1939 ! 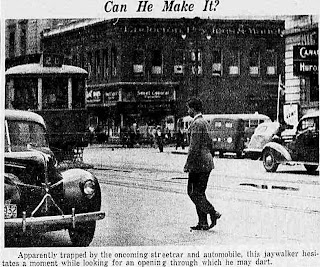 The jaywalker was painted as the ultimate urban evil-doer. Public officials railed against them, the media even tried to shame them into submission by sometimes posting photos of them in the paper. The city tried to tax the issue away in 1941 by skyrocketing jaywalking fines in one of four high-traffic stretches of Portage Avenue or Main Street to a whopping $53, (almost $750 in today's dollars).

The problem persisted and many felt that jaywalking was simply endemic among the population. Was it due to the extra wide streets requiring a lot of time to cross ? The cold winters making the wait for a break in traffic unbearable at times ? A rural town background of many citizens where crossing the street was allowed as a courtesy by drivers ? What about that legendary wild-west heritage for sin and turning a blind eye to laws ? 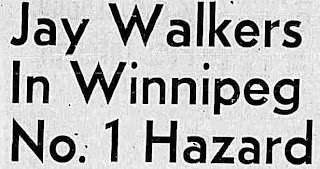 It wasn't until the mid 1940s that the idea that drivers and city planning may have a role to play in the equation. In the above article, despite the screaming headline, it appears that bad drivers were certainly part of the problem during that drive-along. In 1945, the head of the Chiefs of Police organization visited Winnipeg and, though the headline pronounced "City of Jaywalkers", he actually noted some major flaws such as the fact that we didn't use 'walk lights' or have pedestrian islands in the middle of the wide streets. Also, the practice was for motorists not to give way in intersections when turning !

In 1945 and 1946 a number of safety studies and recommendations began to make their way through the civic and provincial levels. The city looked at building more sidewalks at dangerous stretches of road. Lighting and pedestrian barriers were being studied for others. Horizontal parking along major routes was taken to task. The province began improving the Highway Traffic Act to included a pedestrian 'statement of rights' and the novel idea that "The aged, half-blind, deaf, and low-reflex action persons would find it difficult to get a driver's license." (Source Free Press, January 31, 1946).

Interestingly, numbers did begin to drop after this. In 1949 the number of fatalities dropped to two, and in 1950 was up to nineteen. Today, we fare better. According to MPI the number of pedestrians killed in all of Manitoba between 1992 and 1998 was 120. StatsCan says Manitoba had just 10 pedestrian fatalities in 2001 and that average put us at the lower end of the provinces.

An increased focus on jaywalking by authorities and the media and a couple of 'big headline' vehicle-pedestrian stories coming up, (one being the Disraeli pedestrian bridge span, the other what to do with Portage and Main in 2016 when the forty-year agreement to close the intersection expires.

It could lead to the issue of jaywalking being top of mind again. perhaps even to 1940s levels !

A valuable look at the phenomenon. What about a campaign to get timed crossing lights, so we get rid of the "need to be a track-star" to use our signed crosswalks? Only makes sense in an aging population.