The Skywalk Concerts and Lectures series is back at the Millennium Library. At noon on Wednesday, November 3rd Prof. David Burley will speak on Rooster Town: Winnipeg's Lost Suburb. 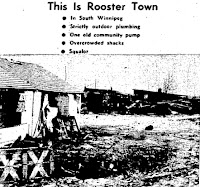 "Rooster Town" was an informal community situated on Winnipeg's southern edge, near present-day Grant Park Shopping Centre, from about 1930 to 1959. it was home to around 200 mostly Metis and Aboriginal people, though its size and ethnic make up varied at times, who lived in homes built of scarp wood form the near by rail yards. it had no city services like water or electricity.

A Winnipeg Free Press story in December 1951 said that "It had its boom when everything else was in a slump - during the depression." Rooster Town was definitely off-the grid and infamous for bush parties complete with home brew and cock fighting, (the latter is believed to be how it got the moniker.)

As the city's boundaries grew, conflict with Rooster Town was inevitable. The post-war housing boom brought residential development right up the CPR tracks near Corydon. These children and those from Rooster Town attended Rockwood School, much to the chagrin of suburban parents afraid of disease and social maladies.

Rooster Town's end began in 1957 when the railway sold off the land for development. The construction of Grant Park High School in 1958 - 1959 drove out the last fourteen families who were paid $75 each by the city welfare department to relocate. Construction began on Grant Park Plaza (now called Grant Park Shopping Centre) in 1962.

This should be an interesting talk on a very little known part of Winnipeg's history.

The Rise and Sprawl said...

Thanks for posting this information about this very interesting and unknown piece of Winnipeg history. I always think of Rooster Town when I go past/to the Pan-Am Pool.

Thanks, I enjoyed looking into it !

I remember hearing about it back when Rockwood has its 50th anniversary - some students did a display on it as part of the school's history collage. Until yesterday, though, I had not delved into it.

Apparently there was a Turkey Town in the area as well at one point.

I think the suburb's name should be changed form Grant Park back to Rooster Town !

I wish I knew about this ,been trying for years to find information ,pictures etc on this area,If anyone can help me will appreciate it,

My dad's family is from rooster town and some of this info is not true.

For those of you interested in Rooster Town, the Free Press has a pretty impressive feature on it in today's paper. http://www.winnipegfreepress.com/local/The-outsiders-366764871.html