Planetizen points to an article from Governing Magazine about the success of changing Vancouver, Washington's Main Street from one-way back to two-way. It's a trend being discussed in other North American cities.

The purpose of "one-ways" is to get cars through the downtown and to / from the suburbs as efficiently as possible. The realization is setting in, however, that trying to (re)create pedestrian / resident / small shop-friendly streetscapes with a three-lane, one-way, mini-highway out front doesn't always work that well.

We've not converted our main drags to one-ways as was the case of Vancouver WA or with Brandon's Rosser and Princess Streets but, like most other North American cities in the 1950's, we switched many of our secondary streets in the core to the 'more modern' traffic practice.

The one-way system was a long time in coming.

The increased popularity of private motor vehicles was putting pressure on the city's small-town street system. In July 1931 the city introduced sweeping changes to the streets bylaw. They  included allowing right turns at red lights and converting most diagonal parking to parallel parking. It also banned turns at Donald and Portage and introduced three one-way streets to the downtown.

As vehicle traffic increased after the Depression and World War II, calls for the city to convert more streets to one-ways appeared regularly in the newspaper. Some residents wanted certain regional streets, even their own residential street, made one-way as they felt it would increase parking and decrease traffic flow.

The city's next large conversion of streets came in 1954. Donald  / Princess and Smith / King streets were made one-way on Sunday, June 27. A number of new turn restrictions were also added. Shaded sections on the map above indicate new time-restricted parking zones.

By the early 1950s even the Downtown Business Association was on board with the plan. Strangely, they acknowledged that the one-way would come with restrictions, in some cases complete, on parking and loading zones in places. Still, increasing the flow of traffic into and out of downtown was seen as a big win. Besides, surface parking lots would become the new norm for those wanting to spend time downtown.

As traffic congestion increased and more big cities went one-way, it was clear that Winnipeg would have to follow.

A plan was drawn up in the spring of 1955 to convert eight streets: Fort, Garry, Hargrave, Carlton, Edmonton, Kennedy, McDermot and Bannatyne into one-ways. Originally intended to go into effect that summer, the process of figuring out the cost of converting infrastructure, from lights and traffic islands to overhead trolley lines, and who would pay for it, stalled the process.

In 1956 the finances were worked out and Sherbrook and Maryland Streets were added to the list. City crews spent the summer making the required modifications to street infrastructure, bus routes were changed and businesses reconfigured their signs and parking lot entrances. 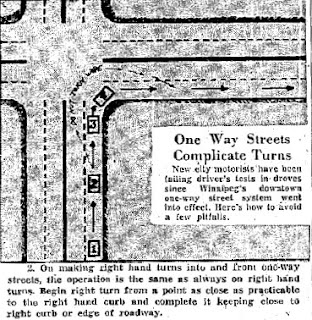 The first days came and went with some confusion but no major mishaps. What was a problem in the medium term were drivers not able to figure out how to make turns. The Free Press helped out with a series of diagrams on their front page a month later.

I totally agree that there is an excess of one way streets in Winnipeg.

My personal feeling is that the we should go back to the drawing board and start dropping various streets in the city from one way status.

That would be a good idea to look at. One-ways, streets where you inexplicably cannot turn left (especially outside rush-hour times) ... so much has changed in 50 years yet the overall street pattern hasn't.

Great research. Thank you. Very interesting to see how long our self inflicted woulds have been happening. Its like the city became a machine for moving cars almost the instant they were invented. Just another nail in downtown's coffin that most people are oblivious to.

Ok...so THAT'S why I saw a photo of Lombard Avenue from the late 30s-early 40s, showing all of the traffic and parked vehicles pointing the same way (east)! It must have been one of the original 3 to go one-way, then get switched back, like Albert was.


Very good post to remember that these emails are still circulating, in addition to the advice you indicate, they are always very useful to take into account, in principle for all Internet users, but mainly for the less experienced, or seniors who are discovering the Internet and out of ignorance or fear of having their email account closed, agree to include their data, with the disastrous consequences.If you want to learn more about Buy resident permits Online you visit

Zymphony Technology Solutions is a premier provider of Managed central Florida and Tampa IT Services, specializing

hi
There,
Thank you for sharing a knowledgeable blog with us I hope that you will post many more blog with us: