And then there were none: Downtown Winnipeg loses its last cinema 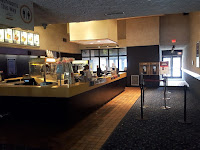 Very sad news that the Towne Cinema 8, the last in downtown Winnipeg, will not reopen.

My teen years were in the 1980s which meant I was spoiled for choice when it came to watching a film downtown. The Towne was such a unique venue that it was hard for a kid not to love it.

It was underground, it sported a bold 1970s colour scheme of reds and oranges, and it had an arcade so you could arrive early and play pinball or video games until the show started. The other downtown theatres didn't have any of that!

That love carried over into adulthood. I still liked the underground maze feeling, admission was cheaper than any other cinema for first-run movies, the shows were rarely packed, and it was the closest cinema to where I lived.

The last film I saw there was 007's No Time To Die in October 2021. It was my "coming out" after nearly two years in lockdown.

Here's a look back at the downtown cinema scene and what made the 1980s so special.

Until the 1970s, most downtown cinemas were in retrofitted live theatres, such as the Metropolitan, Capitol, and Odeon (formerly the Walker Theatre). The Gaiety, which became the Colony theatre in 1975, was built in 1912 as a "picture theatre". There were two modern, custom-built outliers: the two-screen Garrick Cinema that opened in May 1968 and the two-screen Northstar Cinemas that opened in March 1970.

The Capitol Theatre reopened in July 1979 after being converted into a two-screen venue. This was followed by the addition of two more screens at the Garrick that opened in December 1979. Both the seven-screen Eaton Place Cinema 7 and eight-screen Towne Cinema 8 opened in 1981. Later in the decade, another three screens were added when the Portage Place Cinemas came online in September 1987.

Downtown Winnipeg appears to have been at "peak cinema" when Famous Players’ Metropolitan Theatre and Portage Place Cinemas overlapped from September 17, 1987 to November 26, 1987. There were a total of 29 screens in operation.

The 1990s saw the number of downtown screens decline.

It started in 1990 with the closure of three cinemas - the old Capitol and Odeon theatres and Odeon's single-screen Convention Centre Cinema, (the latter would carry on for a time later in the decade as an independent movie house).
The city's first modern-era cinemas were next to go with the Northstar Cinemas in 1999, though they reopened briefly in 2000 – 2001. The Garrick Cinema was put up for sale in 1999 and when a buyer could not be found was demoted by Cineplex Odeon in February 2001 to a second-run, discount price cinema. It closed in March 2002.

By the 2000s there were only two downtown cinemas left.

According to this Free Press article from January 2023, the building and land are for sale with a "no cinema" stipulation. This means the end of the road for downtown cinemas.

I remember seeing the six hour Kenneth Branagh Romeo and Juliet with my high school English class at the Town Cinemas among many other movies I saw with my Dad as a child. It was such a cool cinema. Too bad it’s closed…